US Soldier Bradley Manning could face up to a 136-year jail sentence. 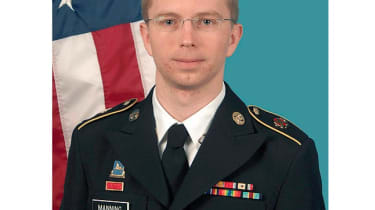 US soldier Bradley Manning is facing up to 136-years in prison after being found guilty of perpetrating the biggest leak in US government history.

Judge Denise Lind found Private Manning guilty of 17 counts, but he was cleared of the most serious charge of "aiding the enemy", which carries a maximum sentence of life in prison.

The 25-year-old soldier is due to be sentenced later today. The court martial heard how Manning leaked hundreds of thousands of classified documents to the whistleblowing website WikiLeaks, which then published them in conjunction with five of the world's biggest newspapers.

The US Government's priorities are upside down.

During his trial, prosecutors argued that Manning was a traitor and not just a whistle-blower.

However, prominent rights groups including Amnesty International believe the US government used Manning's trial to send a strong message to anyone thinking of leaking confidential information.

"The government's pursuit of the aiding the enemy' charge was a serious overreach of the law, not least because there was no credible evidence of Manning's intent to harm the USA by releasing classified information to WikiLeaks," said Widney Brown, senior director of International Law and policy at Amnesty International in a statement.

"The government's priorities are upside down. The US government has refused to investigate credible allegations of torture and other crimes under international law despite overwhelming evidence."

Private Manning had already pleaded guilty to three counts Failure to obey a lawful order or regulation along with two counts of violating the Computer Fraud and Abuse Act.

Altogether Manning is believed to have leaked 470,000 battlefield reports from the US invasions in Iraq and Afghanistan and 250,000 secured cables between the White House and foreign embassies.

Manning, who trained as an intelligence analyst, was also responsible for obtaining a video from a US Apache helicopter attack in Iraq. The footage showed eleven people including a Reuters photographer and his driver being gunned down.

Julian Assange, founder of WikiLeaks, who is facing extradition to Sweden, released a video statement from the Ecuadorian embassy in London.

"This is the first ever espionage conviction against a whistle blower in the United States. It is a dangerous precedent and it an example of national security extremism."