Enter the drones: How UAVs will change the world

Amazon's drone plans were met with derision, but unmanned aircraft could benefit a wealth of industries. 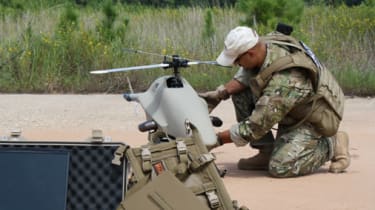 Once the regulatory barriers have been overcome, and lawmakers seek to guarantee the security of UAVs, the world can expect to see commercial drone trials become more prevalent in the Western world. Some of these will bring incredible benefits to numerous industries, Raptopoulos says.

Healthcare will get a huge boost, especially in areas where treatment is more difficult to access, where "needs are high and alternatives are poor", he adds. Matternet has already carried out trials in Haiti and the Dominican Republic, where it has transported blood samples using its flying machines. It ran a brief project in Lesotho too, which brought a 140-kilometer-wide drone network to the African country's capital for $900,000.

He hypothesised using SMS messages to deliver test results too. "You can do this every day, every hour, depending on location, instead of having to wait once a week." This will be a massive boon for those areas where providing treatment to HIV/AIDS victims remains problematic.

Matternet now hopes to have its technology, which uses a network of base stations that the drones use to manage themselves, controlled by customers, rather than doing all the work itself. And it wants to get stuck into bigger, longer projects. "We are still to do something at a big enough scale," he admits.

"We will be able to solve urgent needs, to save lives, and over time as tech becomes better and more ubiquitous, it will be a system on which commercial goods can be exchanged."

The agriculture industry is expected to be one of the biggest beneficiaries. Drone-powered crop surveillance will be big business, helping farmers make better crop management decisions, evaluating images to determine what areas need water, or pesticides, for example.

In Japan, farmers have been reaping the benefits of this method for the last 20 years, says Gielow. They have been flying Yamaha unmanned machines to check up on crops and spray them with whatever substance the farmer deems necessary.

Mapping organisations, either carrying out cartography or checking geographical shifts, such as coastal erosion, have spent significant portions of their coffers on drones too. King claims QuestUAV is between doubling and tripling in size in revenue terms, with 60,000 in exports in 2012 rising to 260,000 in 2013.

"The UAV industry is set to become very large and it is growing rapidly," he tells IT Pro. "Britain is well placed and the export market is there to be had."

This would all point to a coming boom in the drone industry. Crucially, there will be cultural barriers to overcome. Will the general public accept swarms of machines scouring the skies? If Eric Schmidt, chairman of Google, a company that has broken privacy laws by various national regulators, is fretting about the potential impact of drones, many others will too.

"I would prefer to not spread and democratise the ability to fight war to every single human being," Schmidt said in April last year.

There is some way to go in convincing Brits of the need for drones, admits QuestUAV's King. "There's a bit of negativity towards drones, very much born out of Afghanistan and privacy I think there will still be a suspicion."

The UAV industry is set to become very large and it is growing rapidly.

Raptopoulos, though, believes people will be far more accepting of drones once they realise the vast efficiency and environmental benefits they will bring to everyday life. "In 10 years, when I need a bottle of milk, will it make sense for me to get in a car, or have it delivered [by a UAV]? It is about living more responsibly."

Businesses will have to adapt too. Any company that wants to build a drone squadron will have to invest in the right personnel and training. In the UK, the CAA recognises a number of qualifications for pilots, including the Basic National UAS Certificate for Small Unmanned Aircraft and the Remote Pilot Qualification - Small Unmanned Aircraft (RPQ-S). Having pilots who have passed those exams will help businesses convince the CAA they can be trusted.

There will be policies to be drawn up too and IT will have to play a vital role in ensuring UAVs have the right security protections, as they will become one of many targets acting outside of the firewall.

But, if all of these hurdles can be cleared, drones could and should improve the lives of many. And that might just help erode some of the current suspicion of our robotic companions.