Symantec finally updates its Backup Exec software but is it too little, too late?

Symantec's Backup Exec 2014 (BE2014) aims to remedy the shortcomings of its infamous predecessor. The new features list is tiny but the Backup Exec media server now supports Windows Server 2012 and 2012 R2 and the sorely missed job monitor gets reinstated.

Along with improved backup and deduplication speeds, Symantec's granular recovery technology (GRT) now supports Microsoft Exchange 2013 and SharePoint 2013. Upgrading from earlier versions of Backup Exec should now be easier as BE2014 will retain all your backup jobs and settings.

For testing, we loaded the BE2014 media server on a Broadberry server equipped with dual E5-2470 Xeons plus 16GB of RAM and running Windows Server 2012 R2. The install proceeded without any problems and took less than 30 minutes to complete. 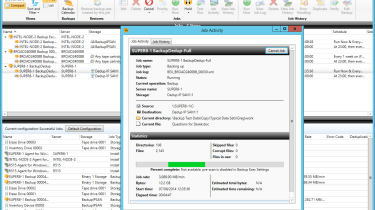 When we reviewed Backup Exec 2012 we warned users that the radically redesigned console presented a steep learning curve and that they should run it in a test environment first before upgrading. Nothing has changed with BE2014 although the obvious addition to the console is the Job Monitor tab.

With this feature back in its rightful place, we could now keep a much closer eye on our backup and restore tasks. Two panels show jobs and job history and we could apply filters to each panel to refine the information on display.

Agents are required on each server to be backed up and we pushed these out from the main console. For testing, we used Windows Server 2012 R2, Server 2008 with the Hyper-V role plus Windows 8.1 hosts and had no problems installing the agent on them. Users upgrading from previous versions will need to deploy the new BE2104 agents to their servers which will require a reboot. 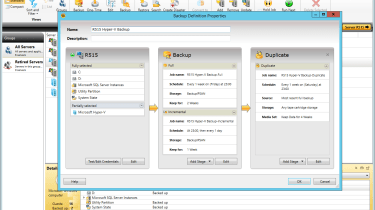 It's all in the resources

With BE2012, Symantec moved over to a resource-centric model which is designed to reduce the number of processes required to create a complete backup strategy. This still holds true with BE2014 and job creation is easy.

From the Backup and Restore tab you select all the servers you want to protect and choose a strategy from the drop-down list which will be applied to them all. Choices will be based on the storage already defined and active licenses but you could easily create a backup to disk job with tape staging for all your servers with just a few clicks.

The new job defaults to starting with a full backup followed by scheduled daily incrementals. Jobs can be modified prior to release so you can edit the backup sources and destinations, change the schedules, replace incrementals with differentials and add further stages if you wish. 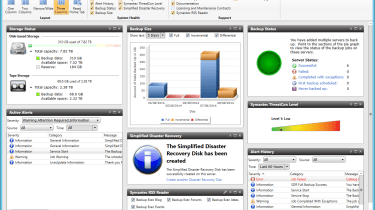 For deduplication, we created a special Disk Storage device with this feature enabled. The only drawback is this is an optional feature costing around 400 extra. Arcserve Backup is far better value as it includes deduplication in the core product at no extra charge.

To test deduplication performance we backed up a Windows 8.1 client to an IP SAN target with this enabled. On completion, we saw that the 90GB of data on the host has been reduced on the target to only 35GB.

Data restoration is more streamlined as when you select a server, BE2014 only presents you with the relevant options for this system. For our standard servers, we were given options to restore files and folders whereas on our Exchange system we had additional choices for restoring the datastore or individual mailbox items.

To use the new simplified disaster recovery (SDR) feature, you'll need to download the 3GB Microsoft Assessment and Deployment Kit (ADK) so you can create ISO files for restoring protected systems. In the first release of BE2014, the SDR environment is based on Windows PE 4 and doesn't support Windows Server 2012 R2 or Windows 8.1. If you don't want to run manual DR you'll need to apply the BE2014 Service Pack 1 which adds SDR support for these host systems. 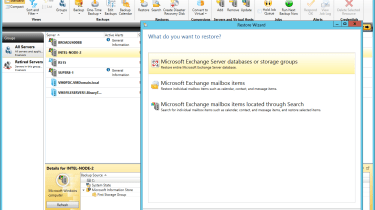 Considering BE2012 was launched over two years ago, it's a big ask to forgive Symantec for taking so long to sort out its flagship backup software. Migration from earlier versions has been improved but we still strongly recommend that users of Backup Exec versions prior to 2012 familiarise themselves thoroughly with it before upgrading.

Backup Exec 2014 remedies many of the outstanding issues of the previous version and existing users will no doubt be very pleased to see the Job Monitor again. It does simplify backup and recovery tasks but we recommend checking out arcserve Backup as it has benefited from a more robust development program and is better value.

Backup Exec 2014 reinstates much missed features and sprinkles in new capabilities. If you’ve been struggling with BE2012 then upgrading should sort out most of your problems.