The website, which provided a place to traffick drugs and stolen identity information, disappeared on 18 March, with multiple users' bitcoins still held in its coffers.

Their cash is locked up in Evolution's escrow system, which prevents funds from being exchanged until both buyer and seller are happy with the deal.

However, the sudden disappearance of the site has sparked outraged speculation suggesting the site's administrators, the pseudonymous Verto and Kimble, have shut up shop and taken the cash for themselves.

Evolution scam: should users have seen it coming?

Others speculated that the newly-wealthy fraudsters may also have purchased fake identities via their own Silk Road-esque site.

While this betrayal has shocked most of the market's userbase, others have been more prosaic about it, with some calling the loss "all part of the game".

Given that the primary purpose of deep web market sites is the transaction of illegal goods using an untraceable currency, it's not entirely surprising that one pulled a vanishing act. 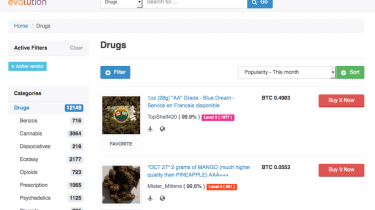 The arrest and imprisonment of Silk Road administrator Ross Ulbricht has proved to the online black market community that these sites are not untouchable. Ulbricht, who ran one of the largest and most successful of these markets, was convicted in February of all charges relating to Silk Road.

This high-profile conviction may have prompted Verto and Kimple to enact their exit strategy'. With Silk Road 2.0 also shut down, Evolution looked set to be the next in line for targeting by the authorities. Did the site's founders get out while they could?

The news comes just a week after the UK government decided to regulate Bitcoin exchanges for the very first time, and provides an unwelcome intrusion on efforts to make the digital currency more mainstream.

The medium of exchange's reputation has been sullied by volatile valuations and a long-running association with illegal sites like Evolution and Silk Road.

But its safety as a currency has also been called into question after the world's largest Bitcoin exchange, Mt. Gox, collapsed in February 2014, prompting an investigation after users accused founder Mark Karpeles of pocketing their money.

The latest scandal has prompted a drop in Bitcoin's value, and users are likely to be far more careful with their funds in the coming months.

While this alleged theft has no impact on the security of Bitcoin as a monetary form, it could make businesses even more wary of adopting the currency as part of their enterprise dealings.