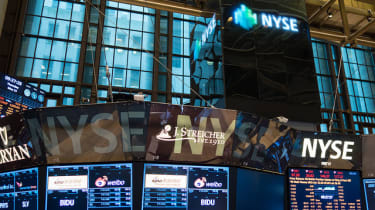 The New York Stock Exchange (NYSE) has resumed trading after a technical glitch that it has denied was the result of a cyber attack.

Trading was suspended for more than three hours yesterday as NYSE worked to resolve what it called "an internal technical issue", fixing it at around 11pm BST last night.

NYSE president Thomas Farley told CNBC that the outage was not the work of hackers.

But it occurred after hacker group Anonymous tweeted just 12 hours before the stock exchange fell offline that Wednesday might "be bad for Wall Street".

One trader, Peter Costa, told the New York Times that NYSE employees had to manually cancel around 700,000 orders that were in the system when it crashed.

"I was about to order my lunch and when I turned around the screens all went blank," he told the publication.

While other stock exchanges like Nasdaq suffered no issues, United Airlines yesterday grounded and delayed flights across the world, with a total 3,500 affected, blaming a network connectivity issue.

The White House briefed President Barack Obama on the NYSE glitch, but Homeland Security later said both the problems experienced by United Airlines and NYSE were not thought to be the work of cyber criminals.

"I have spoken to the CEO of United, Jeff Smisek, myself," Homeland Security Secretary Jeh Johnson said during a speech at a Washington thinktank."It appears from what we know at this stage that the malfunctions at United and the stock exchange were not the result of any nefarious actor."

Application performance monitoring firm Dynatrace said the NYSE outage show how crucial digital uptime is to the financial services industries now, adding they must be able to quickly react and solve such issues quickly.

Digital performance expert David Jones said: "Organisations must have the ability to isolate the cause of performance issues in real-time, or as we have seen today, markets and traders can be thrown back to the dark ages.

"Failure to maintain superior digital performance can create chaos and, as we've seen today, can have crippling impacts on the businesses running applications, the customers they serve, and the markets they operate in."