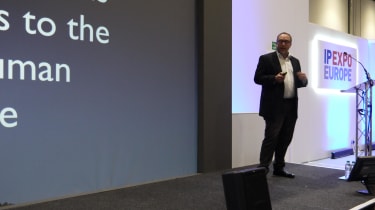 At IP Expo in Excel this year, the keynote speaker is Jimmy Wales: Everybody thinks of him as the founder and final arbiter of Wikipedia but this is only the project that gets him into handshake range with the world's leaders, good and bad.

His next big thing is TPO.com, a mixture of cellphone SIM issuer (yes, really) and social network platform which aims to mix worldwide web access, with charitable giving, and takes a shot at Facebook for poor support of good causes while it's at it.

Besides the now-traditional plug for his next project, he presented to a packed room and the corridor outside a short essay on the growth of secure website and chat application access. SSL is the way forward: For both good and bad reasons, the public have become much more security aware in the wake of the Edward Snowden revelations, and this means that website hosters (Wikipedia principal amongst them) have had to figure out how much of a burden SSL is for their servers.

Jimmy believes that SSL is both a good-enough bar to the kind of casual wholesale logging that security services and law enforcement now routinely ask for, and a sufficient defence against the rising tide of track and trace processes which websites incidentally generate about user access.

The chat program angle is fascinating, because of the almost complete shift to chat in the younger generations of web users for communication that oldies like me generally keep in email. Not really establishing that your chat is end-to-end secure is a personal security failure, says Jimmy. He didn't identify the best option in the public speech, but I can report from the press-closed Q&A that followed that he's a fan of an app called Telegram.

No matter how much he talked about web trends or new projects, it was inevitable that he would face a lot of Wikipedia questions. Here the picture of a philanthropic, world-spanning force for good starts to run into a few difficulties, a bit like a superhero with a cape that keeps snagging on wing mirrors and door handles: While Jimmy will freely refer to the distinction between security services making wholesale data grabs, on the one hand, and properly authorised judicial investigations on the other, there remains a curious blindness to the difference between Wikipedia's user identity management, and Facebook's.

For Jimmy, the issue of inaccuracy or selective editing on Wikipedia is a matter of joining the community and establishing a reputation, and his decision on which topics need exhaustive accreditation and which are just "nickname driven" is final.

Jimmy is very interested in the development of web access and activism in China; in which case he should probably be reading "Mao's Famine", by Frank Dikotter: a history of the Great Leap Forward and how centralised decision making within a privileged elite had astonishing, unintended and disastrous consequences at the grass roots level. The comparison between a Wikipedia editor and the guy in each Chinese village with the Rice Spoon is interesting to consider: How much more harrowing would it have been if that food dispenser had been comprehensively anonymised, as can be the case with editors?

With all that said, it's clear that Jimmy Wales is a force for change at a global level. Even from my position as an entrenched and structural Wikipedia critic, I am still very likely to get a SIM from tpo.com and sign up for the social platform, because the ideas behind that seem sound and more commercially transparent than Wikipedia (which in the UK, of course, is not a registered charity). Forces of change can be criticised, but very seldom actually stopped.