This USB “killer” stick destroys a computer in seconds 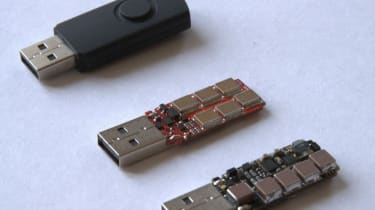 A Russian security researcher has developed a normal-looking USB stick that, if inserted into any computer, will destroy its motherboard and render it useless.

The USB Killer 2.0 has been made to look just like any USB stick used to store information. However, the stick discharges a negative 220-volt charge when it is plugged into a USB port. This is enough to completely wreck not only the USB port but the PC's motherboard as well.

In a blog post, the researcher dubbed Dark Purple says the USB Killer could destroy anything with a USB port, such as televisions, routers, and modems. Even a smartphone connected using a USB on-the-go cable could be affected.

"The basic idea of the USB drive is quite simple," said Dark Purple. "When we connect it up to the USB port, an inverting DC/DC converter runs and charges capacitors to -110V. When the voltage is reached, the DC/DC is switched off. At the same time, the field transistor opens. It is used to apply the -110V to signal lines of the USB interface. When the voltage on capacitors increases to -7V, the transistor closes, and the DC/DC starts. The loop runs till everything possible is broken down."

While USB sticks infected with malware are quite common, USB sticks that rely on some electrical parts to render computers inoperable are rare.

In a YouTube video, Dark Purple demonstrates how an ordinary Lenovo laptop can be affected. The notebook emits a buzzing noise before shutting off, presumed permanently.

However, despite the motherboard going to hardware heaven, the hard drive may still be intact with its contents readable. "It is extremely unlikely that the hard disk was damaged," said Dark Purple.

The previous incarnation USB Killer 1.0 could only manage a maximum voltage of 110V. The new version is twice as powerful and more innocent looking. The new USB stick took a week to develop the circuit implementation and a few months for parts to arrive. Dark Purple then developed and ordered printed circuit boards in China and made a "combat model".

He said that a former colleague of his describes the USB stick as "an atomic bomb: cool to have, but cannot be applied".