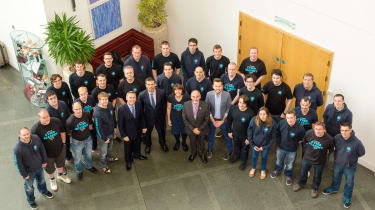 A council employee who processed parking fines has become one of the world's top emerging cyber talents, after graduating with the highest score from the SANS Cyber Academy.

Ross Bradley, 36, spent the last 15 years sorting parking fine paperwork for Newcastle City Council, but after undergoing eight weeks of rigorous cyber training alongside 30 other students, he achieved one of the highest ever scores in Global Information Assurance Certification (GIAC), the globally-recognised cyber security qualification.

He finished the academy's very first course in October after the information security training group, SANS Institute, had advertised for participants, and the organisation picked him and his fellow students from 25,000 applicants following an online aptitude test.

Bradley said: "I was wary of quitting my job and starting the academy, especially when I saw that people working in forensics and with degrees were going. I thought to myself, I don't have a degree, I just work for the council', but I'm glad I went. I wasn't expecting to do so well but I knew I had to work extremely hard. I put a lot of hard work in and I'm glad it paid off."

The UK managing director of SANS, Steve Jones, added: "That someone who has never worked in the profession has such potential is proof that the cyber professionals we need are out there, but the current system is failing to find and nurture them."

The high potential candidates were selected for the industry initiative based on individual potential rather than on their background in the field, Jones said.

By identifying candidates with the right aptitude, then transforming them into cyber professionals, SANS believes its academy offers a swift solution to the tech skills gap, which could hit one million vacancies by 2020 across Europe, according to the EU.

Some of the graduates, whose GIAC test results place them in the top 10 per cent of cyber security professionals worldwide, have already received job offers from companies keen to recruit such talent.

Cyber security firm e2e attended both of the academy's two recruitment days and has since recruited several of the programme's graduates.

Jim Fox, head of cyber development, said: "We were like kids in a candy store. The academy is like the Harvard Business School for cyber - you know the graduates are going in based on their aptitude, and will be going through the best training possible. We are ahead of the game this year and have made some amazing recruits by getting involved early, but we expect there to be a lot more competition for graduates."

One of e2e's new recruits, Carl Urban, added: "The academy takes people with the raw skills and gives them access to world class trainers. The industry is looking at response as much as prevention and organisations looking to fill their cyber skill gap."

Kate Booth, offered a position at the academy after a strong aptitude test score, quit her job as a university lecturer to pursue a future in cyber. She said: "The course is great because it includes people of all ages and backgrounds that haven't followed the usual route to cyber security and doesn't just look at existing skills but also capability and potential. We also had some amazing tutors who do in real life what they were teaching us on the course."

She also noted the potential benefits of such a model to diversity in technology, adding: "It's a great model for supporting women into the industry, avoiding traditional routes which can be quite male-centric. Half the population are women so we are missing the talents of a lot of people.

"I was always interested in maths and science when I was at school and my parents gave me a lot of encouragement to do what I was interest in, but we need to more as a country to support women into cyber security. There is still a way to go, but initiatives like this can really help women break through."

The group is already being recognised for their high achievement, and is expected to go on to have successful careers in cyber. NATO's chief of cyber security, Ian West, flew in from Belgium specifically for the graduation ceremony to present the group with certificates and special graduation coins.

SANS Institute UK MD Jones said: "The model has proven very effective. We spend several months assessing and identifying the most promising students some of whom are working in related fields, but many of whom have never even considered security as a career. We give them the very best, hands-on training available and put them through three GIAC examinations. Eight weeks later you have highly skilled cyber defenders ready for employment.

"It's a good model for an industry with a massive and critical skills gap. We're talking to a number of employers about finding and training their 2016 intake of cyber security staff through the next academy and our next rigorous selection process will start soon."