Your IoT devices could spy on you, admits US intelligence chief

Big Brother may be watching you from the fridge, US spy chief warns 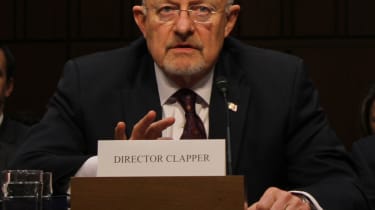 Security services may target Internet of Things devices like smart TVs in order to spy on people, according to US director of national intelligence, James Clapper.

At a US Senate committee hearing on Tuesday, Clapper acknowledged that agents may take advantage of devices connected to the internet so it can track or spy on people.

He said that smart devices incorporated into the electricity grid, autonomous cars and even household appliances could threaten data privacy.

"In the future, intelligence services might use the IoT for identification, surveillance, monitoring, location tracking, and targeting for recruitment, or to gain access to networks or user credentials," he said.

Clapper did not specify which intelligence agencies might use the IoT to spy on citizens, or if such information would be shared with other government agencies.

Last year, it was demonstrated that an internet-connected Barbie doll could be hacked to spy on children.

Broaching the subject of artificial intelligence, Clapper said that the implications of broader AI included "increased vulnerability to cyber attack, difficulty in ascertaining attribution, facilitation of advances in foreign weapon and intelligence systems, the risk of accidents and related liability issues, and unemployment".

"The increased reliance on AI for autonomous decision-making is creating new vulnerabilities to cyber attacks and influence operations," he added. "As we have already seen, false data and unanticipated algorithm behaviours have caused significant fluctuations in the stock market because of the reliance on automated trading of financial instruments."

He admitted there may also be improvements to cybersecurity through AI but such systems would be "susceptible to a range of disruptive and deceptive tactics that might be difficult to anticipate or quickly understand.

"Efforts to mislead or compromise automated systems might create or enable further opportunities to disrupt or damage critical infrastructure or national security networks."