Organisation not relying on Privacy Shield requirements to protect their data

Customers more stringent about data security than EU regulations, according to panel 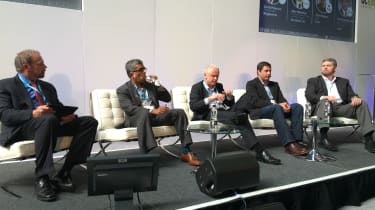 Organisations are demanding stronger security protocols from cloud providers than those required by European law, delegates at UC Expo in London have been told.

At a panel discussion held during the conference, industry chiefs discussed how incoming regulations such as Privacy Shield and GDPR were merely a basic level of data security. According to the speakers, customers are adding more demands on top of what the law already requires  - and the cloud was giving them what they wanted.

"What the law says in one thing," said Steve Kokinos, chief executive of Fuze. "We find that people's own security requirements are much greater than the country they reside in."

Curtis Peterson, senior vice president of operations at RingCentral, told delegates that when it came to the cloud, especially where unified comms was concerned, security had to be "taken very seriously".

"You have to encrypt data at rest or on the move. Also, you need to know who owns the data. Organisations need to know they have control over their data."

Peterson added that most customers want some ability to control data. "Data has to be decoupled from the underlying network so it can go anywhere the customers wants."

The panel also discussed whether or not the cloud was providing a cost effective way of delivering services such as unified comms.

Mike Wilkinson, vice president of marketing at Broadsoft, said that cloud wins in terms of value in distributed environments such as branch offices, as it is more cost effective than on-premise deployments and their associated hardware costs.

"People don't consider upgrade costs. Cloud allows quick upgrades for functionalities such as video conference, whereas on-prem has a lot of hardware costs involved and this is a significant cost," he said.

Peterson added that productivity  also needed to be considered, as for a lot of on-premise deployments it can take on average 11 minutes to get onto a video conference platform.

"If you think about the CEO's wage, this lost productivity soon adds up," he said.