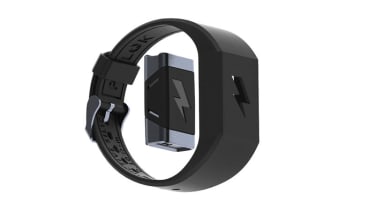 The Pavlok electric shock wristband, which has been designed to stop people over-spending, could present a security risk, Kaspersky Lab has suggested.

Because the wristband connects to your bank account and uses the internet to work, it could be hacked, exposing your bank details to any criminals who wish to mine such data.

"Following the news of the Pavlok wristband which conditions wearers into good spending behaviour by using shock therapy, it is important to factor in the security implications of such wearable devices," Liviu Itoafa, security researcher at Kaspersky Lab, said.

"Wearables face the same security threats as traditional computers. In fact, innovative devices are sometimes even more susceptible to traditional threats. Perhaps even worse yet, in time, these devices will face innovative threats."

The wristband works by keeping tabs on your spending via an app and when it thinks you've spent too much in a certain period of time, it will generate an electric shock in the hope you'll stop splashing cash.

"Wherever devices are used, whatever the technology they're based on, all mobile endpoints that can connect to a network need to be fully secured by the developer ahead of use," Itoafa continued.

Although the wristband is designed for use by consumers rather than businesses, it serves as a reminder to everyone that werabales, especially those that are connected to a corporate network, can pose a risk to both the user and the company as a whole.

"As a further extension of BYOD it needs to be seen within the same overall process. In light of this, companies should review their security strategy to include WYOD (Wear Your Own Device)," Itoafa warned.

"This includes assessing the benefits this technology might bring, and determining the risks and putting in place a strategy to manage it, such as mobile security policies that not only overcome complexity and protect against malware, but also allow for simple human error, loss and theft."