Hacking at 10: How to get your child interested in IT

Reuben Paul is already a keynote speaker at top tech conferences. Here’s his advice for encouraging children to take up tech 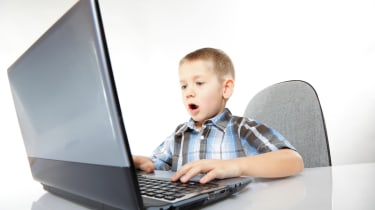 Reuben Paul walks onto the stage to applause, immediately grabbing the attention of the crowd of hundreds of security experts at Kaspersky's annual show with his confident presentation about his early hacks, his company, charity work, and IT education programme.

And Reuben is already an old-hand at tech shows such as Kaspersky's Security Analyst Summit, starting his speaking career two years ago. Not only that, he's a hacker and CEO of a games company that aims to teach children about security, math and other such subjects.

While on stage he's a confident presenter strutting about, speaking fearlessly and engagingly, cracking jokes in person he's a shy, normal kid. We meet after his opening keynote speech, in the Magma hall in Tenerife, and he awaits his father's presence at his side before starting to answer my questions.

His father, Mano Paul, is a security trainer teaching a ten-year- old to hack at Reuben's level must be great advertising and indeed it was while on a call with a client that he noticed Reuben was paying attention to his own work. Mano had blanked on the word "firewall" "it just slipped my mind, what am I trying to say?" and from somewhere behind him Reuben piped up and supplied the correct vocabulary. "How do you know this term," he wondered. "And that's how it started."

Realising his son was interested in the subject, Mano simply encouraged him to keep learning.

And that's the lesson, he says, that parents should take from his eldest son's success in the technology industry key as the government tries to encourage more students into STEM subjects, particularly IT.

"I've learned from this whole experience that as a parent you can't force your child to do anything they don't want to do," Mano said. "If he doesn't want to do this, there's nothing we can do. Parents have written to me sometimes saying how can I make my son or my daughter like your son?' And my first response to them is don't, unless you find out that that's what they want to do. And if they do, then let them."

"They already have access to technology, much more than we had in our times," he adds. "If they're interested in it, don't inhibit them, and don't be surprised if they surprise you because that's what we learned: kids this age can do wonders they come up with very creative solutions."

Reuben agrees. "It's fun," he says. "I like doing what I do. If you don't like it, parents shouldn't force you."

And to would-be junior hackers? "Have fun while you're doing this," Reuben said. "Don't feel too pressured, or beat yourself up just be patient and it'll come."

Indeed, patience is key: many adults find it difficult to understand key technology concepts, so it's no surprise that children will find it challenging and get frustrated. "There were some things [that were frustrating], but my dad was patient with me and talked me through everything," Reuben said.

Reuben's skills aren't only limited to talking about technology. He's also a confident presenter - something many adults never manage to master. Mano says Reuben's talents on the stage were a "God-given gift", saying he and his wife never trained their son to give presentations.

Reuben's first talk was entirely the then eight-year- old's idea to submit a paper. "What was funny was the organiser called me up and said we selected your son, and we'd feel bad if we didn't select your talk to, so we're selecting yours too'," his father says with a laugh.

"We didn't know at that time how he would do, but he was confined to a chair he had to stand on [to be seen over the podium], but he just went with the flow," Mano adds.

Reuben has another answer, however: like many others of his age, he turns to YouTube for answers. "I usually listen to the other talks (at conferences), and I'll watch the good talks on YouTube," he said, with his father noting he'd watch a lot of TED talks, too seeing a 12-year- old inspired him to add that to his list of conferences he'd like to speak at.<

Lest anyone criticise a 10-year- old holding down what's in many ways an adult job, Reuben goes to school full time, and also has a black belt in Kung Fu and attends gymnastics classes, doing his homework as quickly as possible to make time for what he really loves. "He has an active life, but he has a lot of fun," said Mano.

What does all this mean for the future of technology and education? Reuben and Mano stressed you can't make children love technology the way this ten-year- old does, but easy to use and compelling apps such as his own from Prudent Games could help give the next generation a better grasp on staying safe online than many adults have now, while his charity CyberShaolin makes easy to follow YouTube videos and course work, handy for teachers and students.

The trick is finding a way to talk about technology that isn't confusing. Reuben's skill, according to his father, is coming up with visual metaphors to explain complicated techniques, such as comparing hashing to a strawberry smoothie: once the fruit goes in, you're not getting it back out, but you still know it's there.

"I've used many of his examples in my talks," adds Mano. "If a kid can have it explained to them, then an adult will almost always get it."

Many children learn technology better than us adults and Mano predicts that conferences such as Kaspersky's will see more youngsters in the future, and they'll be running the show.

"Today, he's talking about kids being the next generation of cybersecurity," Mano said. "Ten years from now, it will be them [children] that are the main players on stage and that could be a big win in the industry."