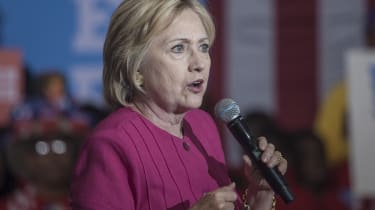 The FBI is reopening its investigation into US Democrat presidential candidate Hillary Clinton's use of a private email server, after it received the necessary warrant yesterday.

The investigation is set to focus on the case of Clinton's aide Huma Abedin, following the FBI notifying Congress late last week that it had discovered 650,000 emails on a laptop she shared with former Congressman Anthony Weiner.

Abedin had previously testified before a Congressional Committee during the FBI's original investigation of Clinton sending hundreds of thousands of emails from a private server during her time in the White House.

The initial email case was closed in July, with the FBI recommending that no charges be brought against Clinton.

However, during an investigation of an alleged sexting case involving Weiner, the FBI found 650,000 emails on a laptop shared by Weiner and his estranged wife Abedin. This led FBI director James Comey to reopen the investigation into Hillary Clinton's email server, to examine whether Abedin's emails are relevant to the FBI's prior investigation.

Clinton and her campaign questioned the timing and reasoning behind the FBI's decision, while Republican candidate Donald Trump suggested the large number of emails found could be indicative of an important discovery.

Trump also suggested that the Justice Department is trying to protect Clinton, as reports claimed it tried to discouraged the FBI from alerting Congress.

At a rally in Michigan, Democratic vice-presidential candidate Tim Kaine said he found it "unusual" for the investigation to be reopened shortly before the election.

A group of around 100 former federal persecutors and officials from the Department of Justice, including Attorney General Eric Holder, wrote a joint letter in which they expressed their concern over the FBI director's decision.

The letter said: "Perhaps most troubling to us is the precedent set by this departure from the Department's widely-respected, non-partisan traditions. The admonitions that warn officials against making public statements during election periods have helped to maintain the independence and integrity of both the Department's important work and public confidence in the hardworking men and women who conduct themselves in a nonpartisan manner."

The investigation is set to continue and is a further blow to Clinton, as the 8 November US election approaches.

06/07/2016: FBI decides not to charge Hillary Clinton over private emails

FBI director James Comey has said the law enforcement agency will not be pressing charges against Hillary Clinton after it came to light she was using a personal email account to send classified US government information.

However, he criticised the presumptive Democratic presidential candidate's "extremely careless" use of a private email server to send sensitive government information while she was secretary of state.

He detailed how there were seven email chains that discussed top secret and special access program level information and Clinton was responsible for both sending and receiving emails of a confidential nature.

Both parties should have realised that such communications should not have happened using an unprotected personal email account, Comey said, but should instead have used the Secretary of State's government address that was sufficiently secured against leaks.

He finished his statement by saying he would recommend to the Department of Justice, which usually makes decisions on whether to charge officials who break guidelines about protecting data, that they do not prosecute in this case.

"To be clear, this is not to suggest that in similar circumstances, a person who engaged in this activity would face no consequences," he said. "To the contrary, those individuals are often subject to security or administrative sanctions. But that is not what we are deciding now."

"We are pleased that the career officials handling this case have determined that no further action by the Department is appropriate," Clinton campaign spokesman Brian Fallon responded in a statement. "As the secretary has long said, it was a mistake to use her personal email and she would not do it again. We are glad that this matter is now resolved."