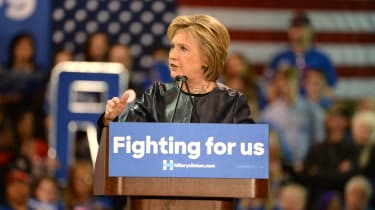 Hillary Clinton's campaign operations were disrupted by a cyber attack on the eve of the US presidential election, it has been claimed.

The news comes from NextGen Climate, an advocacy group supporting Clinton. Suzanne Henkels, spokeswoman for the group, told the Wall Street Journal that NextGen Climate experienced problems with its phone-dialling software on Monday.

This, she said, had been caused by an online attack that hit TCN, the company providing the phone-dialling services used by NextGen Climate.

This was confirmed by TCN, who told The Wall Street Journal that the issue had lasted about an hour, starting at 2.35pm on Monday.

The attacks started on Sunday night and continued for 24 hours, but they affected the web-based software the following day.

An anonymous post on the 4chan message board, written by a user who called himself Sparky, said the writer had planned to use a version of the Mirai botnet to attack TCN and create problems for Clinton's campaign. It is unclear whether the person who wrote this post was the one that conducted the attack.

In an interview with Wired, Jesse Bird, TCN's chief technology officer, said: "The ironic thing is that they were probably impacting Republican calls just as much as Democrat calls."

Bird said that the attack was not targeted at specific organisations, as TCN provides services for around 2,000 clients, including ones affiliated with the conservative party.

Mirai malware acts by taking over a number of IoT devices and using them to flood other computers by flooding them with data. It was the same malware involved in last month's attack that affected websites such as Spotify and Twitter.