User passwords have been reset following a data breach that could affect the entire Lynda.com user base

Lynda.com, the online tuition website and subsidiary of LinkedIn, has warned users of a password reset following the discovery of a data breach affecting up to 55,000 accounts.

In a message on its website, the company issued a notice alerting users that an "unauthorised third party" had accessed a database containing user contact details and information on what courses had been taken. 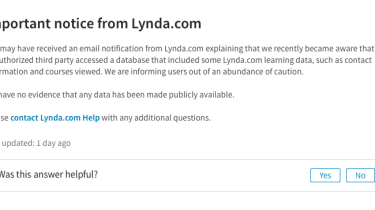 A security notice to users that appeared on Lynda.com over the weekend

LinkedIn, who bought the online education tool in 2015, acknowledged over the weekend that, as a precautionary measure, passwords had been reset for up to 55,000 user accounts, who have since been notified by email.

"We're also working to notify approximately 9.5 million Lynda.com users who had learner data, but no password information, in the database," said a LinkedIn spokesperson in a statement to Neowin.

The website, which offers online educational courses for creative and business skills, also stated that there were no indications that the data had been leaked publicly, and that users were simply being warned "out of an abundance of caution".

It is currently unclear what specific Lynda.com data has been accessed, as no official statements have been made. In a response to user queries on social media, the company simply stated it was "taking the issue very seriously and working with law enforcement".

We are taking this issue very seriously and working with law enforcement. For more info, visit: https://t.co/ClsUifzvfC

This is not the first time LinkedIn has been involved in a data breach, as in 2012 the company was hit by a massive cyber hack, involving over 117 million user accounts - data which subsequently appeared for sale on the dark web in early 2016.

LinkedIn acquired Lynda.com in 2015 in a deal worth $1.5 billion. The social media site was then bought by Microsoft in 2016 for $26 billion, making it the largest acquisition in the company's history.

The breach comes just days after reports of another hack of Yahoo data affecting a record 1 billion user accounts in 2013.