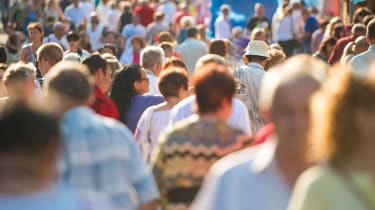 An artist has decided to revolt against the proliferation of facial recognition systems by developing clothing that hides the user's identity by confusing scanners.

Hyperfine clothing, as it has been called, works by presenting lots of different faces and facial features including mouths, eyes and noses to facial recognition systems at the same time.

The designs are simply printed onto fabric, which can be used to mask a wearer's real face and stop them being identified.

Berlin-based artist and technologist Adam Harvey is working with Hyphen-Labs to bring the designs to life. He told the Guardian he aims to overload algorithms with his clothing range, protecting the identity of the wearer.

"As I've looked at in an earlier project, you can change the way you appear, but, in camouflage you can think of the figure and the ground relationship," he said. "There's also an opportunity to modify the ground', the things that appear next to you, around you, and that can also modify the computer vision confidence score."

His earlier project involved styling hair and adding layers of makeup to faces to confuse the same facial recognition scanners. Harvey said he was inspired by photos of the early 20th century, when everyone wore hats to hide their identity. He hopes that, in the future, clothing to prevent people being recognised by technology will be the equivalent.

Data drives the designs, with Harvey analysing 47 different data points from 100 x 100 pixel facial images that express emotions such as calm or kind, as well as different demographics, including age and gender. Facial expressions that could suggest criminal tendencies were also included.

"A lot of other researchers are looking at how to take that very small data and turn it into insights that can be used for marketing," Harvey said. "What all this reminds me of is Francis Galton and eugenics. The real criminal, in these cases, are people who are perpetrating this idea, not the people who are being looked at."