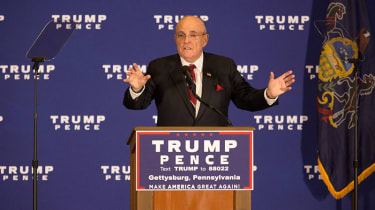 The website of Rudy Giuliani's security company is currently offline, less than 12 hours after it was announced he would be leading a private sector group to advise the Trump administration on cybersecurity.

According to noted hacker The Jester, the site went down at about 5.00 am UK time and at the time of writing (10.20am) remains offline.

Shortly after Giuliani's role as a cybersecurity advisor was announced on US television network Fox News, the security community began examining how robust his company's own site was - and found it sorely lacking.

The site allegedly used a long-outdated version of Joomla! ridden with vulnerabilities, including SQL injection, remote authentication and bypass and numerous cross-site scripting (XSS) holes. A full list can be found here.

Others in the cybersecurity community noted the site's using an expired SSL certificate and was also found to have an exposed CMS admin login.

IT Pro was unable to determine at the time of writing whether Giuliani Security was unavailable as it had been taken offline deliberately, or whether it was being subject to a cyber attack of some kind.

US President-elect, Donald Trump, has named cybersecurity as one of the most important issues for his administration.

In a statement announcing Giuliani's role as an advisor to the incoming president, Trump's transition team said: "As the use of modern communications and technology has moved forward at unparalleled speed the necessary defenses have lagged behind. The President-elect recognizes that this needs immediate attention and input from private sector leaders to help the government plan to make us more secure."

Trump also used his Twitter account on Friday to announce his team "will have a full report on hacking within 90 days". In a press conference this week, Trump said he believed it was likely that Russia was behind the leaking of 19,000 emails from the Democratic National Committee during the run-up to the US election. Trump and President Barack Obama had been briefed on the claims, contained in a 35-page unverified report, allegedly authored by a former British spy.

Trump is set to take office on 20 January.