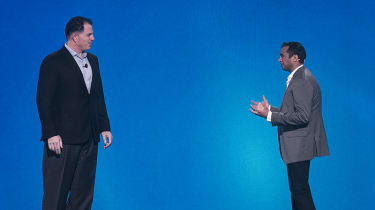 CEOs are worried that complexity may be undermining their companies' security postures, according to Michael Dell.

Speaking alongside RSA CTO Zulfikar Razman on stage for the opening keynote of RSA Conference, Dell told the audience that security is the number one issue for businesses today.

"When I talk to CEOs and boards, this is an issue that's of high concern for them," said Dell. "They're concerned about complexity of their security posture and how they can manage the risks. They need to bridge this 'gap of grief' that you talked about.

"CEOs aren't talking about cross-site scripting or malware injection, they're talking about the business risks and for them it's really a business issue and they want to know how it can be addressed and how they can secure their environment."

Dell also said IT is "breaking out" and becoming business technology, rather than information technology, with the IoT, Big Data and AI-driven analytics playing significant roles.

"When you think about what's going on in the world today with the cost of making something intelligent approaching zero ... and this digital transformation, with all the computer science overlaid on top of that data ... that's a tremendous opportunity," said Dell. "[But] at the same time it has to be done securely."

Dell added that from conversations he's had with both political and business figures, the global economy is no longer their main area of focus. Instead, it's digital transformation, which is radically changing all areas of business life.

"We really feel like we're enabling this next wave of human progress and for me that's a really exciting place to be," he concluded.

Razman said this year's conference was "truly special", as it was the first since Dell acquired EMC, of which RSA was a part, becoming Dell Technologies.

Features editor Jane McCallion is on the ground at RSA Conference 2017 in San Francisco all week. Follow her on Twitter for live updates and bookmark our dedicated page for more coverage from the business security conference.