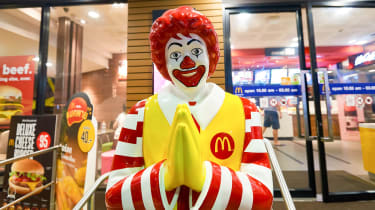 McDonald's has blamed a vehemently anti-Trump tweet on hackers, after the company's official account blasted him as "a disgusting excuse of a President".

McDonald's has publicly apologised for the tweet, stating that the account was compromised. "Based on our investigation, we have determined that our Twitter account was hacked by an external source," a statement read. "We took swift action to secure it, and we apologise this tweet was sent through our corporate McDonald's account."

The tweet also expressed a desire for the return of former president Obama, and pointed out that Trump has "tiny hands".

Unsurprisingly, many Twitter users have reacted with hilarity at a global fast food brand getting into an apparent Twitter spat with the president of the United States.

Others, however, have called it a conspiracy, claiming that the stunt was orchestrated by Obama's former press secretary and calling for a boycott of the restaurant chain.

McDonalds claims their anti-Trump was done by a hacker.Evidence?Their communications director worked for Obama. pic.twitter.com/59Gz79vFnw

Security experts have warned that this should be a wakeup call for companies that aren't properly securing their social media accounts.

"Companies using Twitter in recent years have gotten much better about using group management software with 2FA/MFA options," said F-Secure security advisor Sean Sullivan. "But still, there's the possibility that an employee with access can be compromised."

"McDonalds and other companies can enforce multifactor authentication to limit damage via phishing, but if an employee's device is hacked? Well, then the hacker has access to whatever is logged on at the time."