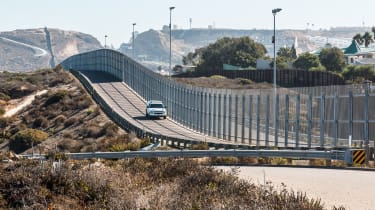 Oculus founder and VR champion Palmer Luckey is consulting with US lawmakers over the possibility of developing a "smart" wall as an alternative to President Donald Trump's costly campaign promise, it is reported.

The "Secure Miles with All Resources and Technology" act, known as SMART, is a new piece of legislation proposed by Texas Republican representative Will Hurd, who is seeking to apply technology to the issue of border patrol, a moderate counter-proposal to President Trump's aggressive show of force, according to a CNN report.

To shore up the bill, Hurd has called on Luckey's new company Anduril Technologies, a Silicon Valley-based startup founded by the entrepreneur following his departure from Facebook-Oculus.

The startup was working on a project that would develop a virtual version of Donald Trump's campaign promise, a border wall using surveillance technology and drones rather than bricks and barbed wire, the New York Times reported last month. The startup is currently on the lookout for "brilliant, dedicated, and patriotic engineers", according to a recruitment page, to work on optics, camera systems and LIDAR and RADAR technology.

Trump's wall running between the southern US states and Mexico was a central pillar of his campaign, however the president has since admitted that the topology of the border would make it difficult to build a physical wall. Trump has also faced roadblocks in Congress, which has so far denied his funding requests to begin construction.

Initial consultations have priced the wall at $500,000 per mile, according to the report, a fraction of the $24.5 million per mile detailed in Trump's fiscal year 2018 request. The proposals include the use of virtual reality headsets, computer imaging, and sensors supplied by Anduril Technologies, which would help bypass the geographical limitations of a physical wall.

"People that are dealing with this issue know that a third century solution to a 21st century problem is not going to fix this long term," Hurd told CNN. "We haven't looked at all 2,000 miles of our southern border at the same time, and for the last eight years we've tried to have a one-size fits all solution to the border, and that doesn't work."

Hurd, whose Texas constituency covers more than 800 miles of the southern border, is supported by Texan Democratic moderate Henry Cuellar, and representatives from California, New Mexico and Pennsylvania.

Although it represents a moderate solution, this isn't the first time Luckey has publicly shown support for Trump and his policies. His views came under fire when it was revealed in September that he had quietly donated $10,000 to Nimble America, a non-profit political organisation working to denigrate Hillary Clinton online. Although Facebook never confirmed the reason for Luckey's departure from the company, it is rumoured his brush with politics was a deciding factor.