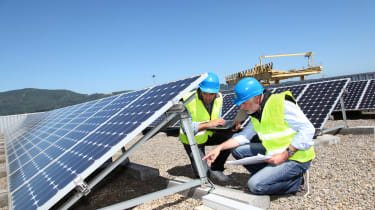 Hackers could exploit a recently discovered flaw in solar panels to overload energy grids and create power cuts, according to new research.

The inverters, many of which are internet-connected, could be targeted by hackers, allowing them to remotely control the flow of power, according to the research.

Following the discovery, Westerhof performed a field test near Amsterdam of two inverters produced by German supplier SMA, where he was able to demonstrate the hack.

"If an attacker does that on a large scale, that has serious consequences for the power grid stability," said Westerhof, speaking to the BBC.

Westerhof first discovered the vulnerabilities when working on an undergraduate dissertation, and explained his further research at a security conference in the Netherlands on Monday. The full details of the hack have not been released in an effort to prevent malicious attacks.

Responding to the comments, SMA told IT Pro: "We would like to stress that SMA does not agree with him, as some of his statements are not correct or greatly exaggerated. The security of our devices has highest priority for SMA in all respects. We already assessed the mentioned issues on a technical basis and [we are working] intensively on the correction."

The company said that only four of its models were affected by the vulnerabilities, and that all other devices adhere to the latest security standards. Users are urged change their default passwords when the devices are installed.

"We will publish further technically detailed responses to Westerhoff's claims on our company website within the next couple of days," SMA said, adding that it was working on an official report on the security of its devices with the Dutch National Cyber Security Centre.

A UK government report published yesterday proposed huge fines for companies managing essential infrastructure, if their cyber security is found lacking. Under the Network and Information Systems directive (NIS), failure to implement adequate cyber security measures to thwart hacking attempts would result in fines of up to 17 million, or 4% of a company's global turnover.

The latest proposals are part of a 1.9 billion National Cyber Security Strategy, an effort by the government to shore up the UK's cyber defences and prevent attacks like May's WannaCry ransomware attack against the NHS.