The hacking group goes after another company 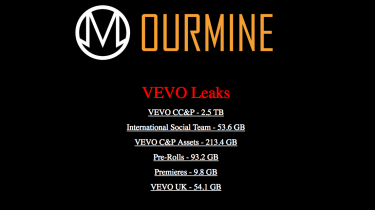 OurMine announced today that it has leaked 3.12TB of Vevo files which people can access on the web.

The files are available to be viewed via the OurMine website and can be downloaded too. The hacking group decided to leak the information after a Vevo employee supposedly told the group to "F**k off" after it informed the company it had the files.

A Vevo spokesperson told IT Pro: "We can confirm that Vevo experienced a data breach as a result of a phishing scam via Linkedin. We have addressed the issue and are investigating the extent of exposure."

According to Gizmodo, the hacked files include a number of office documents, videos and other promotional materials. Some of the material was sensitive, for example the code to disabling the alarm at Vevo's UK office.

The files are split into six different links and are have titles such as "Premieres", "VEVO CC&P" and "VEVO UK".

Vevo is a music video and entertainment platform that has around 250,000 videos from artists like Katy Perry, P!nk and Taylor Swift. It is a joint venture between Sony, Warner Music and Universal Music and Alphabet is one of its shareholders.

In August, OurMine took over HBO's social media accounts and posted: "Hi, OurMine are here, we are just testing your security, HBO team please contact us to upgrade the security - ourmine .org -> Contact".

The group also 'hacked' Wikileaks at the start of September where it changed the website's homepage. It wrote: "Hi, it's OurMine," the message read. "Don't worry we are just testing your... blablablab [sic], Oh wait, this is not a security test! Wikileaks, remember when you challenged us to hack you?"