The future of cyber security 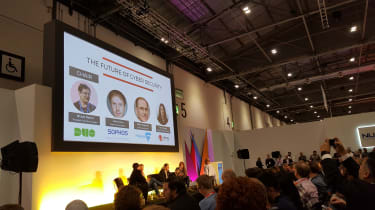 IP Expo hosted a panel today on the future of cyber security, where the panelists talked about what they expected the future to hold for the industry.

The chair of the session, Wendy Nather, principal security analyst at Duo, talked about how the industry needs to change. She said: "We've been doing a lot of the same things for the last twenty or thirty years: for example, telling people to patch and they will be fine - which has worked really well so far."

Nather added: "For the last several decades, we have been writing these programmes for one another as technologists in a small community, thinking the same way, and the interfaces that we insisted were intuitively obvious were only intuitive if you thought the same way as the people who wrote it. But now the rest of the world is using this technology - it's not just enterprises, it's not just IT people, it's everybody."

Rik Ferguson, global vice-president of security research at Trend Micro, had a dark warning about the future of AI and weaponry.

"One of the things that I find particularly scary is the fact that we have a petition in front of the United Nations from 120 leading academics and scientists to outlaw autonomous weaponry," he said. "Weaponry that can select its own targets and engage with no human interaction. So, we are already in Skynet."

Ferguson added: "I have absolutely no doubt that attackers will begin using AI and machine learning to build autonomous attack machines."

He is also alarmed that AI platforms are open and easy to use, which he said is great for business but he is worried criminals will take advantage of it and "are ready to seize those innovation platforms".

Mikko Hypponen, CRO at F-Secure, agreed: "It's so clear that these autonomous killer robots will become a reality when you think it through."

Hypponen used drones as an example, stating that humans currently pilot them. The obvious weakness is that there is a link between the drone and human which can be cut, disrupted and interfered with.

"If you want to remove that possibility, it's obvious, you let the drone do its work without the human," said Hyponnen. "This is going to happen, and it's scary as hell."

James Lyne, global security advisor at Sophos, said that new and emerging technologies, such as a fleet of interconnected autonomous vehicles, gives the opportunity for attackers, especially terrorists, to attack beyond the scale they have today.

He also highlighted how current problems need to be overcome now in order to progress: "We are on a path to do that in the world of legitimate tech, for what we think are legitimate reasons, while we are still trying to fight over freedom to and freedom from law enforcement over encryption."