3 reasons why Nadine Dorries is totally wrong about password sharing 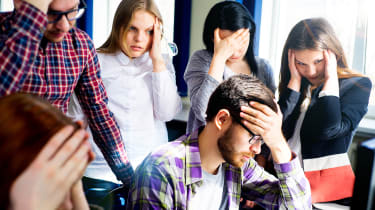 Shh - what's that? If you listen very, very carefully, you'll hear it; it's the sound of countless security experts smashing their heads against their keyboards in frustration. The cause, as so often before, is the government's laughable attitude to data privacy and cyber security.

Where to begin with this latest shambles? You may recall that First Secretary of State Damian Green was allegedly found to have rude and naughty pictures of the pornographic variety on his government-issued computer, which Green denies.

Yes folks, you read that correctly - Dorries is so free and easy with her access credentials that she even hands them out to visiting exchange students. To make matters worse, several of her fellow MPs admitted they also share their login details with staff, including Nick Boles, Will Quince and Robert Syms.

Of course, Dorries was quick to downplay the seriousness of her actions, stating that all she has on her computer is a shared email account, with no access to government documents. Boles, similarly, said that only the four people he employs to deal with correspondence from constituents have access to the passwords, which are regularly changed.

For the avoidance of doubt, let's be crystal clear: this is a dangerous, insecure and irresponsible practice. Under no circumstances should anyone be sharing one login between multiple staff members. There are numerous ways to ensure staff members can access a shared computer, mailbox or file storage system without having one login that simply gets passed around, and the fact that government MPs are apparently not using any of them is extremely alarming.

Dorries and co claim that sharing their login with staff isn't an issue, but let's take the time to unpick some of the many, many problems with these arguments.

Firstly, there's the issue of lateral movement. Dorries says that the only thing on the computer is a shared email account. Even if that's true, the computer itself is 'Westminster-based', and is likely to be connected to some kind of internal network. This opens up the possibility for lateral movement, using Dorries' machine as a way to gain access to a more important target within the network.

Then there's the issue of data protection. The shared mailbox used by the staff of Dorries and Boles presumably contains at least a partial list of constituents' names and email addresses, along with who knows what additional information shared as part of their correspondence. Behaviour like this puts all of that information at risk.

Let's imagine that, instead of perusing some nudes, the First Secretary of State was instead accused of using his computer to leak classified intelligence data to Russian agents. With a single shared login, it's virtually impossible to trace the source of the leak back to the mole. If everyone has their own credentials, it's instantly obvious.

The concept of not sharing your username and password with anyone is a basic, fundamental tenet of cyber security best practice, and the tools to ensure that you shouldn't need to share your credentials have existed for years. Considering that the Tories are supposed to be the party of business, its own staff seem to be trailing laughably far behind the curve when it comes to keeping up with industry security standards - which would be funny if it wasn't so alarming.