The financial details of at least 5,000 UK companies have been exposed in third-party compromises, with attackers selling exposed email accounts for as little as $150 online.

But concerningly, cyber criminals are able to easily access the 12.5 million email archive files publicly exposed due to improper backup procedures, and wouldn't need to breach an organisation's security in order to do so.

"One issue that this research particularly highlights is the risk posed by third parties and contractors, who are often forgotten about by businesses and security teams when it comes to defending your network and data," Digital Shadows' strategy and research analyst Rafael Amado told IT Pro.

"Often, short-term workers will back up their files and emails on personal NAS drives and leave this misconfigured.

"This issue goes beyond email account compromises. Businesses need to have a better understanding of where all their sensitive data resides and who has access to it. Third parties and suppliers are an important component of this."

Some of these emails are incredibly sensitive, with analysts finding in one instance a whole accounting firm's email correspondence with clients made publicly-available including thousands of invoices and tax returns.

The FBI earlier this year estimated that the damage to businesses from the practice known as business email compromise (BEC), including fake invoices and wire fraud, globally cost businesses $12 billion over the last five years.

Once compromised, businesses' financial details are frequently shared and traded on criminal forums and on the dark web.

Hacking services are available for as low as $150, but finance department credentials are lucrative, with Digital Shadows finding individuals offering up to $5,000. Many are searching for company emails that contain ap@, ar@, accounting@, and invoice@, among other terms. 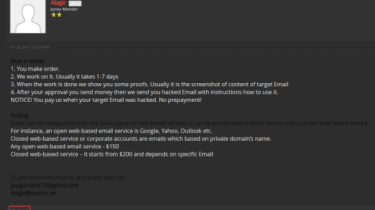 A forum user offering hacking services from as little as $150

Alongside services for acquiring business emails, malicious actors are known to offer between $150 and $500 per compromised businesses email. Some accounts, however, such those based on open web-based email services are more expensive than closed ones.

In this case study outlined in the research, analysts learned the attacker wanted emails from accounting departments of specific targets and was searching specifically for accounts with accountspayable@, accountsreceivables@, payables@ and receivables@. 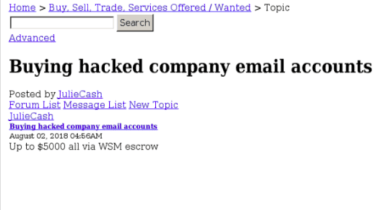 Some Dark Web users are paying up to $5,000 for hacked email accounts

The attacker specified 100 targets in this campaign, including organisations in construction (56), education (18), property (10) sectors, as well as 15 other companies. The majority of these were based in the UK, Australia, and Singapore.

"Business Email Compromise is becoming increasingly profitable for threats actors, who are conducting highly targeted campaigns," the research said. "Unfortunately, we're making it easy for adversaries to gain access to the precious information that sits within email inboxes."

Digital Shadows recommended seven steps for employees and businesses to take to bolster their protection against BEC. These include updating security awareness training to include such scenarios, as well as building them into contingency plans.

Analysts also recommended that manual controls be implemented in wire transfer applications which can monitor for exposed credentials.

But above all, preventing email archives from being publicly exposed is crucial. Risks can be mitigated by using strong, unique passwords and disabling guest access, as well as whitelisting IP addresses if an internet connection, or passwordless-access, is needed.