In the most widespread experiment of its type in British military history, robots will be tested for their frontline effectiveness 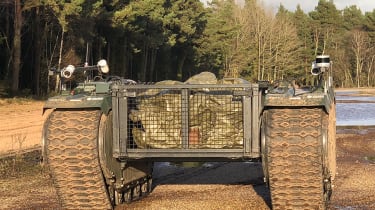 Today marks an exciting step forward in the British Army's technological development. Starting today and spanning four weeks, British troops will test over 70 different pieces of technology on the fields of Salisbury Plain in an attempt to reduce danger to soldiers in battle.

The exercise will culminate in a battlegroup experiment where the best-performing pieces of tech will be tested in tough simulated operational environments.

Titled the 'autonomous war experiment', the month-long testing of new technology will see prototype unmanned aerial and autonomous ground vehicles tested with a focus on securing 'last mile' resupplies. The last mile refers to the mile closest to troops on the approach to the combat zone which is notoriously difficult to navigate. Ensuring troops receive the vital food, fuel and munitions they need is of paramount importance and the army believes new tech has the answer.

"Our troops now have the chance to test out a huge range of robotic kit in what will be the biggest exercise of its kind in our history," said Defence Secretary Gavin Williamson.

"This equipment could revolutionise our Armed Forces, keeping them safe and giving them the edge in an increasingly unstable world."

Autonomous Warrior 'will play an integral role' as it is rolled out as part of the 800 million Defence Innovation Fund launched in 2016. The fund was introduced in the wake of 2015's Strategic Defence and Security Review, which recognised the need for a new approach to innovation.

Now, the massive budget will be implemented with the goal of aiding ground-breaking projects which will help it meet the Ministry of Defence's defence priorities.

"It aims to harness the talents of academic and industry experts, especially in SMEs, to create disruptive capabilities, using the UK's science, technology and research base to develop new capabilities, more quickly," said the MoD.

"Apart from uncovering specific, concrete products and applications, the initiative is also intended to change the culture of defence, creating a greater awareness of imaginative ways of problem solving and becoming more open to risk taking."

This isn't the first time in recent weeks that the British Army has made the news with its call for new tech. In October, IT Pro reported the Army's invitation for companies to pitch them ideas for new wearable tech that could prevent battlefield injuries, even if they weren't originally designed for military application.

While the embrace of new technology comes as exciting news, some are still sceptical as regards its military applications. Electronic Frontier Foundation (EFF) published research in August 2018 warning the world of possible attacks on military AI, claiming the biggest threat to AI implementations would be systems accidentally attacking each other. That frightening prospect would supposedly be caused by novel attacks such as 'data poisoning' on insecure systems.