The weakest link in cybersecurity is still humans, it would seem, as the annual list of 100 worst passwords has highlighted just how complacent some of us are.

Compiled by software company SplashData, the list is based on 5 million leaked passwords from various data sources around the internet. Predictably, the worst offender for the fifth year running, appearing the most on leaked datasets, was '123456'.

From 100 to one there are different variations and expansions of the number one password, such as '123123', '654321', '123456789', and other simple number strings that follow familiar patterns. There's also a running theme throughout that suggests a rather lazy approach to cybersecurity, with many passwords consisting of just one digit used repeatedly, like '111111' and the rather devilish '666666'. 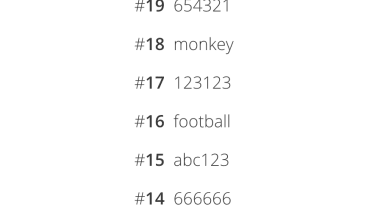 'Football' is still one of the most commonly used passwords on the internet, coming in at 16

A new entry for the year was 'donald', which has become so popular that it's the 23rd most frequently used password on the list. This was one of 11 new entries to make the top 25, all of which, like the rest of the list, fail to take into account basics. Users are regularly urged to use solid password should be unique, about eight to ten characters long and contain a mix of numbers and lower and upper case numbers.

As so many of these simple passwords are continuing to see use, Jake Moore, a cybersecurity expert at ESET, believes that websites could do more to help us.

"With over 925 million cyber-attacks in September 2018 alone, I think it's fair to say everyone needs to up their password game in 2019 and think more carefully about online security," he said.

"However, this needn't just be a dig at the account holders, websites need to ban simple and overused passwords. At the risk of upsetting convenience, being forced to use a complex password will help shed light on the subject and over time build confidence. Using a password manager is a great way to start and they will help out if you're ever stuck for thinking up a complex strong and unique password."