Improve your security or the printer gets it 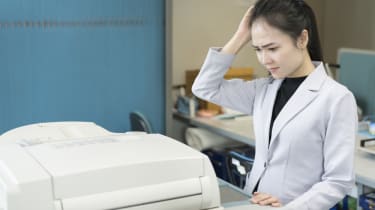 Supporters of a YouTube vlogger are hacking printers to encourage more subscribers, whilst warning that they can also cause physical damage.

Swedish internet star PewDiePie has 77 million followers and last month some of those fans hacked at least 50,000 printers, forcing them to spit out messages asking for people to subscribe to his YouTube channel. There was also an added message to unsubscribe from a rival channel called T-Series.

But it's not just promotion, the anonymous hackers also said it was about getting people to realise the vulnerabilities in their printer firmware.

The latest variation of the same hack has come back, this time with a serious warning from one of the perpetrators; pay attention or your printer will get it.

"I've been trying to show that 'hacking' isn't a game or toy, it can have serious real-life consequences," the anonymous hacker told the BBC. "We really want people to pay attention to this because causing physical damage is very much a possibility.

The nameless hacker explained that flaws in the printer's firmware meant they could continuously force data to written by its chips. The chips only have a limited lifespan of 'writes' and if kept on a loop for long enough the hacker said: "the chip will fry and the printer will no longer function."

Beyond the physical damage, assailants also warned the hack lets them see and alter potentially sensitive information as it's printed out.

It's claimed that more than 100,000 machines have printed out the message, but as yet those claims have not been verified. So far, victims from the UK, US, South American, Spain and Australia have reported incidents on Twitter, but as yet there are no reports of any actual damage to printers.

My Dymo printer just told me that I need to subscribe to @pewdiepie but I'm already a subscriber 😂 pic.twitter.com/Hm7veeyEiO

A similar vulnerability saw a hacker called Stackoverflowin take control of more than 150,000 printers at the start of 2017. Printers manufactured by HP, Brother, Epson, Canon, Lexmark and Minolta were hacked by a program that searched to find them offline.

When discovered, the program ordered the printer to alert the user by printing out a message that read, "stackoverflowin the hacker god has returned, your printer is part of a flaming botnet, operating on putin's forehead utilising BTI's (break the internet) complex infrastructure. [ASCII ART HERE] For the love of God, please close this port, skid. ------- Questions? Twitter: https://twitter.com/lmaostack."