WhatsApp denies having any association with the fake app 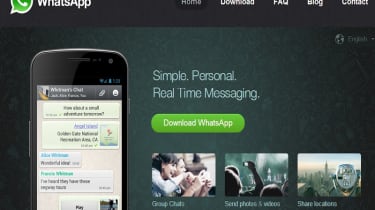 WhatsApp Gold, the scam that's been hitting users' phones since 2016, has once again surfaced, masquerading this time as a new update that hides a malware payload.

WhatsApp Gold has been confirmed by WhatsApp to be a hoax set up by scammers to convince users that by clicking on the link users can receive an update to a new form of WhatsApp. Some previous iterations have attempted to convince users that the new version is exclusive and previously only available to celebrities.

The latest message to do the rounds reads: "Today the radio was talking about WhatsApp Gold and it is true. There is a video that will be released tomorrow on WhatsApp and is called Martinelli. Do not open it. Enter your phone and nothing you do will fix it. Spread the message if you know someone. If you receive a message to update Whatsapp Gold Do not open it! They just announced that the virus is serious. Send it to everyone."

While the message only hints at the idea of WhatsApp Gold, there is no such service in existence. What's more, it seems the purpose of the message is also to spread fear about a potential malware threat known as 'Martinelli' again, no such video exists.

It isn't the first time we've heard of 'martinelli' either. Back in 2017, a similar pseudo-warning was circulated around the messaging app claiming that a video called 'martinelli' would download malware to the user's device if it was opened when in fact, no such video existed.

WhatsApp Gold has used various means to convince users that the link provided was genuine from the promise of free flights to scare tactics such as convincing the user was hacked and that their phone number would be changed imminently.

The original, poorly constructed message distributed in 2016 read: "Hey Finally Secret WhatsApp golden version has been leaked, This version is used only by big celebrities. Now we can use it too."

It's important to stay savvy when receiving messages from unknown contacts in any messaging service. The same awareness of phishing emails must be applied to everything you receive on the web.

Any updates to WhatsApp will usually occur automatically, or through your device's app store. If it looks too good to be true then it probably is and you should never open links from an unidentified source.

If you have encountered the message, the best course of action is to ignore it and delete it promptly.