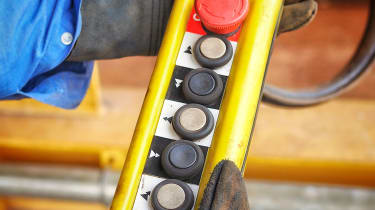 Radio Frequency (RF) remote controllers that are used to operate connected industrial machines are highly susceptible to cyber attacks, according to security researchers.

In its study, Risky Radio Remotes: Attack Classes and Attacker Models, security firm Trend Micro suggests that the more rugged variety of radio controllers, used for heavy-duty purposes such as the control and automation of industrial machines like cranes and drills, could be hijacked in a number of ways.

RF controls use a transmitter to send out radio waves corresponding to a command, usually a press of a button, which a receiver interprets as an action - for example, opening up a garage door. Trend Micro said the industrial version of this technology, which is used in various sectors such as construction, manufacturing and logistics, is highly vulnerable to hijacking.

"In our research and vulnerability discoveries, we found that weaknesses in the controllers can be easily taken advantage of to move full-sized machines such as cranes used in construction sites and factories," Trend Micro said.

"In the different attack classes that we've outlined, we were able to perform the attacks quickly and even switch on the controlled machine despite an operator's having issued an emergency stop (e-stop)."

One of the most worrying aspects of this discovery is that for the majority of the methods outlined, potential hackers either only need to be within the vicinity of the target or they can perform it remotely.

The research found that controllers that use RF are susceptible to command spoofing, where an attacker within range can capture radio traffic, selectively modify the packets, and automatically craft new commands.

A hacker can just be within the range of a construction site, pretend to be a bystander, hide a battery-powered, coin-sized device and use it remotely to craft their own packets to control an industrial machine or persistently simulate a malfunction, such as a DDoS attack.

Considering the earlier example of a garage door, which uses RF protocols, Trend Micro actually found them to be more secure than industrial remote controls as they implement better security through rolling-code mechanisms.

Hackers can also clone a remote controller, or its functionality, to hijack a machine and as mentioned earlier, hackers can replay emergency stop commands indefinitely to engage a persistent denial-of-service condition.