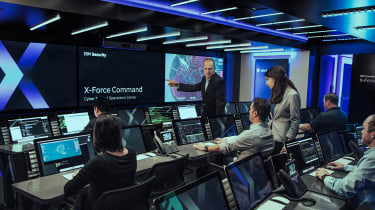 IBM's cyber tactical operation centre (C-TOC) - which is located inside an HGV - will be parked up on London's south bank near the tech giant's headquarters this week to put national businesses and universities through their paces in military-style cyber security training.

IT Pro paid a visit to the mobile defence unit yesterday to experience the role-play element that will now be used to train the cyber security teams are tasked with protecting critical infrastructure for the entire nation.

Representing a fictitious Fortune 100 financial services company Bane & Ox, the goal of the exercise was to prevent reporters from finding out about the breach and, ultimately, fight the attack well enough to prevent the CISO from being fired.

The mobile "cyber range" is a state-of-the-art facility packed into the back of a blacked-out 18-wheeler truck. Originally built in Cambridge, Massachusettes, it's in the UK for the first time to provide leading-edge training to some well-known organisations.

NHS digital will undergo the exercise as well as Oxford University to name just a few before the C-TOC heads to Dublin next week.

Caleb Barlow, vice president of IBM's X-force threat intelligence cyber security team, said "it's not if, but when", speaking about the likelihood of a business being attacked.

IBM is targeting business but also people "at the grade-school level" in the hope that they can inspire a new generation of people to pursue a career in cyber security.

Barlow said, "there is a two million person gap between the available jobs in cyber security and the people to fill them.

"If we think about the cyber security climate, this is one of the biggest societal issues of our time."

Nick Coleman, a former UK government security official who's now IBM's cyber security global leader, said that cyber security was considered an issue for 75% of businesses. He added that some 43% of businesses had experienced an attack while just 13% had an incident management protocol in place.

What is really impressive about this is that it brings to life what it is like to live through a cyber attack. No one who experiences this simulation will leave without realising what a threat a cyber attack could be to their business," said Ed Vaizey MP who spoke at the event.

"Like all great ideas, I'm amazed nobody had thought of it four or five years ago, but I'm glad that IBM is now leading the way in building a state-of-the-art Mobile Command Center to help deal with the real cyber security threats that can easily bring down very big businesses," he added.

Keep your eyes peeled on the site as the ultra high-pressure role-play situation we were placed in will be explained in greater detail in a feature to be published later this week.