John McAfee goes on the run from the US government - again

Controversial billionaire declares he is “at war” with the SEC 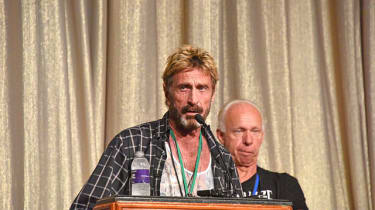 John McAfee has once again taken to Twitter to announce he is fleeing from the US government, claiming that he's being charged with "unspecified IRS crimes of a felonious nature".

The controversial cyber security pioneer posted a video on his Twitter account claiming that the IRS - the US government's tax enforcement division - has charged him, his wife, and several of his team with a number of crimes.

The McAfee 2020 Campaign is, as of this day, in exile. I am being charged with using Crypto Cuttencies in criminal acts against the U. S. Government. More videos coming shortly. Stay tuned. pic.twitter.com/C75zcbnKTD

While McAfee said that the crimes were "unspecified", he is by his own admission a tax-avoider.

"I have not paid taxes for eight years," he said. "I've made no secret of it. I have not filed returns. Every year I tell the IRS... come and find me."

He claims that "it's not illegal".

McAfee says that he's being charged by the IRS, but other clues indicate that he may also be on the run from the US Securities and Exchange Commission (SEC). In his tweet, McAfee said that he is "being charged with using Crypto Cuttencies [SIC] in criminal acts against the U. S. Government", and as the agency responsible for monitoring financial crime, any cryptocurrency-related crime would be the SEC's responsibility, rather than the IRS'.

It is not the first time that McAfee has had a run-in with the US white-collar crime watchdog. Indeed, the antivirus founder has had numerous run-ins with the agency over the years.

Most recently, he threatened to "rip [the SEC] a new asshole worthy of parking a tractor trailer in" after the agency ruled that promoting cryptocurrency ICOs without disclosing that you've been paid to do so constitutes fraud. McAfee regularly promoted so-called 'alt-coins' for a period last year, and it was later revealed that he was paid more than $100,000 per coin.

Me? Worried about the SEC? I have openly, publicly and in the media ridiculed that corrupt, puss filled, bile dripping abcess on the fabric of America. Come for me SEC. I will, in every media outlet in this country, rip you a new asshole worthy of parking a tractor trailer in.

McAfee is a well-known figure in the crypto community and has been a big proponent of crypto currencies as an enabler of personal freedoms. As he explained in his video, he believes that the widespread use of cryptocurrencies will prevent governments from collecting income taxes, which will lead to conflict with the crypto community at large. "We are today at war," he said in his video.

McAfee attempted become president as part of the 2016 campaign, running as a candidate for the libertarian party. His campaign was characterised by bombastic quotes from McAfee, often focusing on his chequered past.

"I have no shame," he said; "yes, I've been in jail. I've taken drugs - more drugs than you in the audience can ever f*cking carry."

He has not abandoned his political ambition, and has previously announced his intention to run for president in 2020, once again as a libertarian candidate.

Going on the run has not fazed him either, and McAfee said that he plans to conduct his campaign "in exile".

Fleeing from the authorities is becoming something of a habit for McAfee. In May 2018, less than a year ago, he posted another video saying that he had "gone underground" in order to evade the SEC, which he claimed has too much power. He similarly made headlines in 2012 when he went on the run from authorities in Belize, who wanted to question him over the murder of his neighbour.

McAfee has confirmed his intention to remain on the lam. "I will not allow them to imprison me and shut my voice down," he said, "which they will do immediately. Why? Because I am a 'flight risk'."

"Obviously. I am in flight."