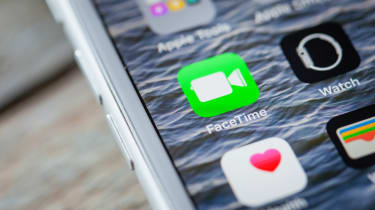 A worrying bug in Apple's FaceTime application has emerged, which allows callers to gain unauthorised access to a recipient's camera and microphone even when the recipient doesn't answer.

In order to eavesdrop on someone via FaceTime, the caller would have to add another person to the call (that other person can be yourself) while ringing the target iPhone which would grant the caller access to the recipient's phone.

Going one step further, it was later discovered that by pressing a volume button after the microphone bug was triggered, FaceTime would then grant access to the recipient's front-facing camera.

Now you can answer for yourself on FaceTime even if they don’t answer🤒#Apple explain this.. pic.twitter.com/gr8llRKZxJ

The exploit would function even when 'Do Not Disturb' mode was enabled, and the bug affects iPhones running the latest version of iOS.

It's not just iPhones that were affected either. Tests showed that calls from iPhones to Macs which have a longer FaceTime ring also worked, allowing the caller to eavesdrop on the recipient for even longer.

"Technology bugs occur far more often than the average user may think," said Jake Moore, cyber security expert at ESET UK. "Luckily Apple is usually quick to adapt and patch up the flaws. However, we do not know how long this bug has been around for and if it has been taken advantage of by cybercriminals who exploit these vulnerabilities.

Apple has since released an update, as noted on its System Status page. Group FaceTime has been disabled, presumably as a temporary fix while Apple figures out something more permanent.

In a statement, Apple said that it's "aware of this issue and we have identified a fix that will be released in a software update later this week."

Just last week, Apple had to release a patch to its iOS because of a different FaceTime vulnerability which allowed remote hackers to initiate FaceTime calls from a targeted iPhone.