Google admits error for not disclosing mic in Nest alarm 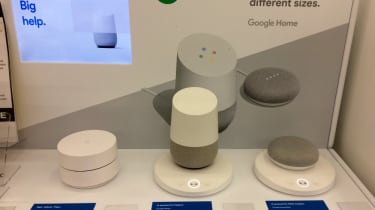 Google has admitted it made an error by not disclosing a microphone built into one of its alarm systems.

Earlier this month the company announced an update to its home security system, Nest Secure, which would allow users to integrate Google Assistant on their device. But, this revealed a technical detail with the hardware that users were unaware of - there was a microphone inside the device.

"Google Assistant will be available on your Nest Guard, so you can ask it questions like, 'Hey Google, do I need an umbrella today?' before you set your alarm and leave the house," 9to5Google announced at the start of February.

The problem with this new information is that is it is new to everyone outside of Google. The microphone was never disclosed within the products specifications. Speaking to Business Insider on Tuesday, a Google spokesperson said the company had made an error.

"The on-device microphone was never intended to be a secret and should have been listed in the tech specs. That was an error on our part," the spokesperson said. "The microphone has never been on and is only activated when users specifically enable the option.

"Security systems often use microphones to provide features that rely on sound sensing. We included the mic on the device so that we can potentially offer additional features to our users in the future, such as the ability to detect broken glass."

As the spokesperson explained, there is a legitimate reason to have a microphone within a security device, because much like human beings, we sense and detect things in a number of ways. But the "error" in not disclosing its existence only adds more scrutiny into how these big tech companies are arguably invading the privacy of the general public.

There's has been plenty of evidence to suggest home speakers, such as Google Home and Amazon Echo's Alexa, do listen and record conversations in the background. In November a US court ordered Amazon to release recordings and data from an Echo device to help in a double murder case. The basis for the demand being that it may have picked up evidence of the crime or the removal of the body, without the suspect knowing its recording.