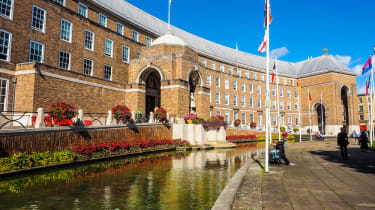 Staff at Bristol City council have unleashed a wave of spoof phishing attacks on their own colleagues as part of wider efforts to bolster the organisation's cyber resilience.

The council's cyber security risk is considered "higher than should be expected", according to a report recently prepared for the organisation's resources scrutiny committee.

The reasons for this cited include a lack of investment in appropriate technologies, reliance on in-house expertise and self-assessments, alongside a lack of formal approach to risk management, and a historic lack of focus.

As a result, the council has taken the extraordinary step of targeting its own staff through a phishing attack exercise, in which IT staff are sending emails to staff to see how users react to this form of cyber attack.

Anybody who succumbs to one of these council-borne phishing emails will be redirected towards targeted training via a link, the report said. The outcome of this exercise will then inform how the council improves its non-technical controls and training in future.

"Like all organisations, we face increasingly sophisticated and varying threats to our digital systems," a Bristol City Council spokesperson told IT Pro.

"This report provides assurance that of the threats we are aware of, measures are in place to maintain the security of our systems.

"We continue to work closely with a range of organisations to ensure our systems can effectively respond to the risk of cyber- attacks and that all data remains safe and secure."

Its members were updated on the council's increased cyber security threat, among other risks being monitored, for the third quarter of 2018/19 at a meeting in late February.

The council's novel strategy to combat cyber threats makes sense in the context that employees themselves are often considered a threat to any organisation's cyber resilience. Analysis by Coalfire, for instance, demonstrated that human error was the weakest security link in an organisation given the prevalence of phishing attacks.

But the risk increased to '3x7=21' for the last three months of 2019. This means while the likelihood of the council suffering an attack has remained the same, the potential fallout of any cyber threat is now considered much greater.