Controversial figure insists that he will not pay 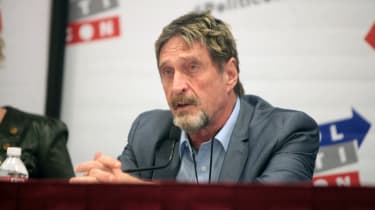 John McAfee has been ordered to pay $25 million in damages over the killing of his ex-neighbour Gregory Faull in 2012.

The judgement was handed down by a US Federal District judge in Florida, based on a wrongful death lawsuit by Faull's daughter which claims that McAfee paid $5,000 to have Faull killed.

"John McAfee's depraved acts of plotting, financing, and directing Greg's murder reflect that he has absolutely no respect for life or law," Faull's family said in a statement. "Although Greg cannot be replaced, today we are comforted that John McAfee's evil acts have been officially condemned through the power of civil justice."

"The Faull family appreciates the hard work of their attorneys who pursued John McAfee for more than six years working diligently across the United States and in Belize. They further appreciate the cooperation of the Belize government and their police force. We continue to hope and urge the U.S. Department of Justice and the Belize government to pursue a criminal investigation against John McAfee for murder for hire and torture of our beloved Greg."

The suit marks the third amended complaint that McAfee has been served with; in all cases, he has failed to officially respond to the complaint or to make an appearance in court. In his absence, the court has ruled against McAfee, who has been instructed to pay Faull's estate $5 million in compensation for emotional distress, $20 million in damages and around $8,400 in funeral costs.

McAfee responded to the judgement via a statement on Twitter, announcing that he has no intention of paying the damages, on the basis that he has no funds with which to do so.

"I have no assets, so it is truly a mute [sic] point," the statement read.

The Estate of Gregiry Faul was just awarded a $25 Million judgement against me: https://t.co/OZ65Jirsb3Here is my formal response to the media (who will spam my phones tomorrow and who are responsible for most of my 200+ lawsuits.) pic.twitter.com/Bsde9plr03

McAfee also highlighted the high number of lawsuits that have been brought against him in the past, indicating that he considered many of them to be frivolous. One of these was the lawsuit brought against him after the death of his 22-year-old nephew Joel Gordon Bitow and another man, Robert Gilson, in an aircraft crash in 2006.

Bitow was a flight instructor at one of McAfee's previous business ventures, an 'aerotrekking' firm that involved flying small aircraft short distances between remote airstrips over low altitudes. Bitow was operating as a flight instructor despite only holding a sport pilot certificate, rather than a full pilot's license - an act that is illegal in the US.

Gilson's family also filed a wrongful death suit after the crash, which resulted in McAfee being ordered to pay $2.5 million in damages back in 2014. McAfee has never paid.

Ignoring lawsuits and refusing to pay the resulting judgements has become a pattern for McAfee, and one that he appears proud of, saying "I refuse to play the legal extortion game aimed at America's wealthy class".

The death of Faull is one of McAfee's more notorious episodes, and occurred while he was living in Ambergris Quay in Belize, in a compound surrounded by guards armed with automatic weapons and a number of dogs.

Faull, who was one of McAfee's neighbours in Ambergris Quay, was attacked "at least once" by McAfee's dogs, according to the suit, and complained about them to both McAfee himself and the local Belizean authorities. Jeffrey Spiegel, one of Faull's friends and neighbours, testified that when no action was taken to bring the dogs under control, Faull "took matters into his own hands" and poisoned the animals.

The lawsuit claims that upon discovering this, McAfee became "irate", put the dogs down (with multiple gunshots) and began "parading up and down the beach, screaming". It alleges that following this incident, McAfee arranged for the payment of $5,000 to "violent" local man Eddie McKoy to "subdue, torture, and murder" Faull. Faull was discovered in his home with taser burns on his torso and genitals, and a single gunshot wound to the back of the head.

Spiegel testified that he, along with the rest of the residents of Ambergris Quay, "immediately concluded" that McAfee was behind the murder, but McAfee maintains his innocence, arguing that he was never suspected or charged with murder by the Belizean authorities, although his statement fails to mention that he went to extreme lengths to evade questioning, including fleeing to Guatemala and illegally crossing the border.

John McAfee founded security software company McAfee Associates in 1987, later known as simply McAfee, however, he retired from his work in 1994. He would eventually sell his remaining stake in the company and no longer has any association with the brand.

McAfee is currently running for president in the US 2020 elections. He is conducting his campaign 'in exile', on a boat that is stocked with large amounts of alcohol and automatic weapons. He claims that he is on the run from the US tax authority, who he says are pursuing him for financial crimes. He also regularly promotes various cryptocurrencies, claiming that they offer a way for people to seize control from the government. McAfee has previously been paid in excess of $100,000 per coin for his endorsements.