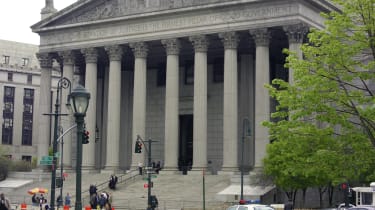 A Lithuanian man has pleaded guilty to defrauding Facebook and Google out of more than $100 million - agreeing to pay back his share of the ill-gotten gains.

Evaldas Rimasauskas, who is originally from Vilnius in Lithuania, was extradited to the US in 2017 to face charges for wire fraud. He entered a plea to a district court in Manhattan and could face a maximum sentence of 30-years in prison.

Prosecutors accused Rimasauskas and unnamed co-conspirators of bilking Google and Facebook out of more than $100 million by posing as Asian hardware vendors claiming that the tech companies owed them money.

"As Evaldas Rimasauskas admitted today, he devised a blatant scheme to fleece US companies out of $100 million and then syphoned those funds to bank accounts around the globe," said Manhattan US attorney Geoffrey S. Berman.

"Rimasauskas thought he could hide behind a computer screen halfway across the world while he conducted his fraudulent scheme, but as he has learned, the arms of American justice are long, and he now faces significant time in a US prison."

The method of fraud used by Rimasauskas is called 'business email compromise' where fraudsters ask for money by using emails targeted at companies that either work with or make regular wire transfers to, foreign suppliers. It's becoming a popular type of scam with the Federal Bureau of Investigation stating that losses from such scams have totalled more than $3 billion since the agency began tracking them in 2013.

Through fraudulent phishing emails, both Google and Facebook employees and agents wired funds to the bank accounts controlled by Rimasauskas, who then quickly wired them to various locations around the world, including Latvia, Cyprus, Slovakia, Lithuania, Hungary and Hong Kong.

The scheme defrauded Google out of $23 million and $99 million out of Facebook, according to that Lithuanian court order. Rimasauskas contributed to the scheme by setting up a fake company and bank account in Latvia, but as part of his plea, he agreed to pay back his share of the money - $49.7 million.

Rimasauskas is scheduled to be sentenced on 24 July and IT Pro has approached both Google and Facebook for comment.