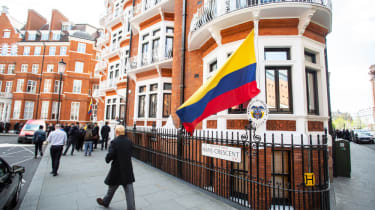 Hacking attempts on the Ecuadorean government have doubled since Julian Assange was arrested inside the country's London embassy last week.

According to Reuters, telecommunications vice minister Patricio Real told reporters that the websites for the country's presidency, central bank and foreign ministry has received 40 million hacking attempts per day since the WikiLeaks founder was arrested and removed by police on Thursday.

"During the afternoon of April 11 we jumped from 51st place to 31st place worldwide in terms of the volume of cyber attacks," Real said.

Real didn't provide any details as to who or where the attacks had come from and said it would be difficult to identify the hackers. However, he did say the hacking group Anonymous, which has taken credit for cyber attacks on government institutions in the US and UK, had made a threat.

He also said the hacking attempts had not led to the theft of any government data but had made it difficult for employees and citizens to access accounts on the sites. The South American country will receive cyber security assistance from Israel.

Assange had been seeking asylum in the Ecuadorean embassy since 2012 to avoid extradition to Sweden in a sexual assault investigation. These chargers have since been dropped but over the course of seven years, the relationship between Assange and the embassy soured dramatically.

WikiLeaks claimed the embassy has been trying to find a mechanism to eject him for some time and have taken steps to make life difficult for Assange, such as cutting off his internet access in 2016.

After his arrest, US prosecutors announced charges against Assange for allegedly conspiring with former army intelligence analyst Chelsea Manning to gain access to a government computer as part of one of the largest compromises of classified information in US history.