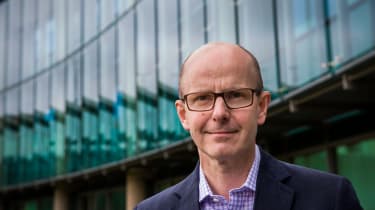 GCHQ director Jeremy Fleming has said the agency will begin sharing real-time intelligence with banks in a bid to help fight cyber crime.

The decision will ensure that banks have more tools in their arsenal when it comes to protecting customers against card and account fraud while also helping the banks themselves in pre-empting and mitigating cyber attacks on them.

Fleming, who made the announcement at a CyberUK event in Glasgow on Wednesday, said the move illustrates GCHQ's ambition to work more closely with businesses.

The agency monitors online activity on a 24/7 basis and will now share this information with banking groups, an idea which aims to reduce the number of cyber attacks GCHQ has to deal with itself.

Figures revealed in October last year showed that the agency fights around ten serious cyber attacks every week, most of which were either "directed, sponsored or tolerated" by hostile foreign governments.

"This move from GCHQ illustrates how collaboration across all industries involved in the fight against fraud is crucial to facing today's threats and keeping customers safe," said Marck Crichton, senior director of security product management, OneSpan. "The fight against fraud today relies heavily on the analysis of vast amounts of real-time data [and] with technology-enabled financial crime increasing, banks need to be able to act fast".

Fleming said that only 15% of people know how to protect themselves online and GCHQ wants to take the burden away from the individual, despite efforts more widely to make people more cyber aware. "We will share intelligence with banks to enable them to alert customers to threats in close to real time," he added.

The two-day CyberUK event, which kicked off on Wednesday, is hosted in partnership with the NCSC and aims to bring together security industry professionals, the private sector and public bodies to hear from and interact with industry leaders and learn about emerging trends.

During the conference, the once super-secret Five Eyes intelligence alliance formed of the UK, US, Canada, Australia and New Zealand will all field representatives to feature on a panel discussion delivered to attendees. It's likely they will be fielded questions about the latest development in the UK's relationship with Huawei's infrastructure.

Bank fraud is becoming an increasingly more troublesome issue for customers. TSB recently announced that it will be refunding all of its customers who fall victim of cyber fraud which, according to figures from 2018, affects one in four Britons, costing an estimated 1.2 billion.

Earlier this year, Metro Bank made the news for all the wrong reasons after it emerged that hackers had intercepted the bank's 2FA customer text message to gain access to UK customer accounts.

Hackers were able to exploit the SS7 protocol used by telecoms companies to securely route text messages to customers - a highly sophisticated method of attack previously thought to be out of the realms of possibility for cyber criminals.