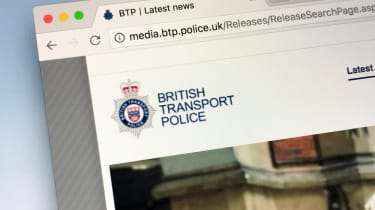 The email addresses and phone numbers of British Transport Police (BTP) staff have been leaked after hackers compromised the newsroom section of the police force's website.

The BTP confirmed it was recently "made aware of a cyber security threat" to its website, which is hosted by an external supplier, and have entirely suspended its newsroom section as a precaution. This has been replaced with a Tumblr feed while investigations ensue.

Although BTP did not provide a timeline of the attack, the earliest post on this makeshift news feed dates back to Monday 13 May, with the rest of its archive appearing blank.

"The Force has worked closely with the National Cyber Security Centre, the National Crime Agency and the external supplier to understand the nature of the threat and if there has been any compromises," a spokesperson said.

"This system has no affiliation with the Force's crime management or command and control systems and has not compromised the Force's operational capabilities. All the relevant authorities have been notified of this incident.

"BTP is supporting an ongoing investigation being coordinated by the National Crime Agency and the National Cyber Security Centre and is working to restore the latest news section as soon as possible."

Although the hack was first thought to have targeted just the news section, early investigations have revealed a "small number" of employee's BTP emails and telephone numbers were exposed.

The National Cyber Security Centre (NCSC) told IT Pro its staff are aware of a cyber incident affecting the BTP and are working with them and law enforcement partners to advise on measures to mitigate the effects.

The NCSC also corroborated the BTP's claim that the incident only affected its newsroom section, and posed no threat to either its crime or command and control systems.

IT Pro approached the Information Commissioner's Office (ICO), which confirmed it will assess information around the hack provided by the BTP.

It is not yet clear whether hackers had specifically targeted BTP, or whether its supplier had been caught up in a non-targeted cyber attack.

But malicious actors previously did strike the computer systems of the Police Federation of England and Wales (PFEW) earlier this year in what appeared to be a random cyber attack.

The association body representing near-120,000 police officers was able to contain the attack to just its Surrey headquarters and prevent it from spreading to its 43 individual branches across the country.