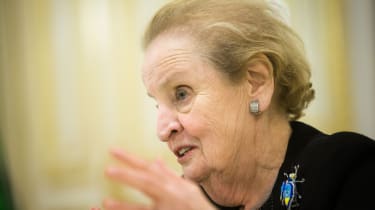 Despite myriad benefits businesses have accrued from technological leaps, bad actors are finding it easier and cheaper than ever before to abuse the internet by stealing trade secrets and spread disinformation.

Collaboration between the institutions we rely on and private sector organisations is critical, according to former US secretary of state Dr Madeleine Albright, because non-state actors now own swathes of the physical infrastructure the internet is built on.

If private sector tech firms and non-governmental organisations (NGOs) aren't let in on conversations around how to combat emerging cyber threats at a state-to-state level, they will begin to crumble as cyber threats continue to evolve, she argued.

"Of course the technological revolution has been an incredible gift in several ways," Albright told delegates during a special address at this year's Citrix Synergy, "but we still don't know whether information technology is simply the latest in a line of advances that have helped to modernise the world without doing much to civilise it.

"I hardly need to describe for this audience how bad actors, whether governments or criminal groups, have taken advantage of the internet to pilfer trade secrets, surveille critical infrastructure and cause economic or even physical damage."

As a means of showing how quickly the world has changed in a short space of time, Albright revealed that she didn't even have a computer on her desk, let alone an email address, when in office.

Emerging cyber threats, like state-sponsored disinformation campaigns, were quite simply not something Albright had to concern herself in her role as secretary of state.

"The cyber threat that has continued to evolve is something we need to keep looking at," she continued.

"For all the warnings that were issued for a cyber Pearl Harbour, it appears now that the most immediate threat are attacks that are harder to deter because they stop short of what we would consider an act of war."

In recent years, enemies have become skilled at abusing social media platforms to pollute users' feeds with rumours and disinformation, as well as anti-democratic propaganda. She also cited Russian television adverts that warn viewers that 5G wireless technology could kill you.

This form of cyber warfare is running rampant among forces not just within Russia, but the likes of China, North Korea, Venezuela and Turkey, as well as extremist groups littered across the world.

To fight this global issue, which is akin to "assembling an airplane while already in the air", businesses must follow the lead of firms like Microsoft, which has spearheaded joint-efforts with NGOs and other companies to create 'rules of the road' to protect digital society.

"Of course I'm not saying that we should put non-state actors at every decision table," she added. "But the international system needs to adjust to the impact of these agents of change and they need to be there at the beginning of decision-making and not just to pick up the pieces."

Any such efforts to engage in discussions and share best practice, led by businesses in the international interest, would be crucial to preventing a cyber arms race between nations.