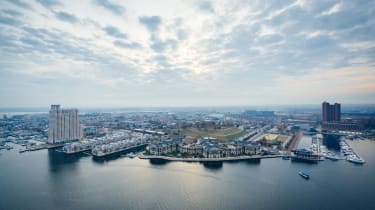 The city of Baltimore has been locked out of its online services for more than two weeks after thousands of government computers were infected with ransomware.

The hack, which was first discovered on 7 May, has shut down a number of government services, including those for paying tax, parking tickets and water bills, and has prevented employees from sending or receiving emails. The perpetrators, who have yet to be identified, have demanded a ransom payment in the form of bitcoin, however, the city's government has so far refused to comply.

According to US media reports, the hackers used ransomware called RobinHood, malware that makes it impossible to access server data without a digital key - a key only the hackers have.

In a ransom note obtained by the Baltimore Sun, seen via Vox, the hackers have demanded payment of 13 bitcoins, worth just under $100,000 at the time of writing.

"We've been watching you for days and we've worked on your systems to gain full access to your company and bypass all of your protections," the note said. "We won't talk more, all we know is MONEY! ... Hurry up! Tik Tak, Tik Tak, Tik Tak!"

The hackers said that the ransom demand would increase if it wasn't paid in four days, adding that the locked information would be permanently locked if they were made to wait ten days for payment. However, both of these deadlines have now passed with the city government refusing to pay.

The government haven't given a timeline for when all services will be restored and, according to Mayor Bernard Young, it could take months before its back to normal.

"Our focus is getting critical services back online and doing so in a manner that ensures we keep security as one of our top priorities throughout this process," Young told the Guardian. "You may see partial services beginning to restore within a matter of weeks, while some of our more intricate systems may take months in the recovery process."

This is Baltimore's second ransomware attack in 15 months, following the targeting of the city's 911 and 311 phone systems last year.

The city of Atlanta was also hit by a cyber attack last year, which saw employees shutout of digital civic services, reportedly costing 17 million to fix.