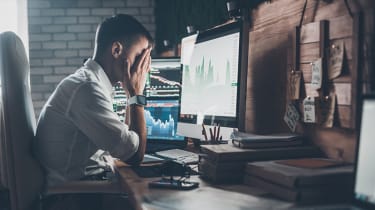 Cyber security professionals in the UK are struggling to hold back the ever-increasing wave of threats with limited resources, leading many to consider quitting their jobs.

These are the findings of a survey of 300 specialists working in large UK organisations with 500 employees or more.

Some 79% of respondents said they were facing a lack of resources both technological and human despite the increasing number of security threats faced by all businesses. The problem is so bad that nearly three quarters (72%) said they had considered leaving their jobs over it.

Half of those surveyed said a lack of cyber security specialists was their greatest problem, with ineffective technology taking second place (47%). Human error and insufficient budget were also found to be concerns, coming in at 40% and 41% respectively.

Despite 57% saying they were suffering from alert overload - with an average of 33 pieces of software in use per organisation - 65% said they thought more technology would help lift some of their burden.

Increased automation, in particular, is considered to be one of the most attractive solutions, with 86% saying their organisation would benefit from using this type of technology.

Ed Macnair, CEO of cloud security company Censornet, which commissioned the survey, said: "It's no secret that companies of all sizes have been having a hard time finding qualified personnel to manage their often-overwhelmed security operations."

"Until now, humans have been limited by their inability to see across multiple point products and correlate information - without huge amounts of manual work.

"Automating activity such as repetitive low-level tasks usually undertaken by a human can free up limited analyst resources to focus on more advanced tasks, helping to close staffing and expertise gaps and also help stave off cyber fatigue. It is taking the security industry beyond events and alerts and into 24x7 automated attack prevention."