Has the US government finally nabbed John McAfee? 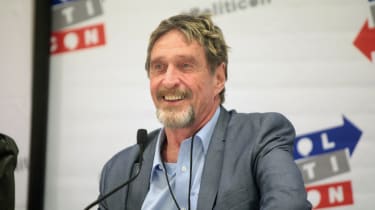 Infamous security and cryptocurrency magnate John McAfee may have finally been captured by US authorities, following his dramatic 'escape' from the country by boat.

Last night, McAfee's official Twitter account posted a thread claiming that he, his wife Janice and several other travelling companions had been "detained by authorities at their latest port of call". The tweets were ostensibly posted by Rob Loggia, the campaign manager for McAfee 2020 presidential bid, who said that he will be operating McAfee's Twitter account to provide updates on the situation.

(1/4) This is @loggiaonfire again. I have good reason to suspect that John McAfee, @theemrsmcafee and other companions have been detained by authorities at their latest port of call. I will be operating this account providing updates as they become possible.

"I last spoke with John as his boat was being boarded," one tweet read. "The situation was tense but controlled. Our conversation was cut short by authorities confiscating their phones."

In late January, McAfee announced (for the second time in as many years) that he was going on the run from US tax and financial enforcement authorities, taking to his so-called "Freedom Boat" with a large collection of alcohol and automatic weapons and embarking on a tour of countries like Cuba and the Bahamas. According to McAfee, he was being pursued by multiple government agencies, including the Securities and Exchange Commission, the Internal Revenue Service and most recently, the CIA.

The CIA has attempted to collect us. We are at sea now and will report more soon. I will continue to be dark for the next few days. pic.twitter.com/o79zsbxISl

Loggia's tweet thread also references a contingency plan which McAfee has previously talked about. This supposedly involves caches of data left with a number of trusted individuals around the world, who are under instructions to release it to the public should McAfee disappear.

McAfee has a long and chequered history with law enforcement. He has, by his own admission, declined to pay any taxes or file tax returns for close to a decade and has claimed to be under government surveillance on multiple occasions. He was also notoriously implicated in the death of his neighbour Gregory Faull in Belize. A judge in the wrongful death suit brought by Faull's family ordered him to pay $25 million in damages this year, which McAfee has said he will not pay.

While McAfee has claimed to be fleeing US authorities, as of yet there has been no official confirmation that any law enforcement agencies have issued warrants against him.