Never give humans the keys to your kingdom, say Goldman Sachs security chiefs 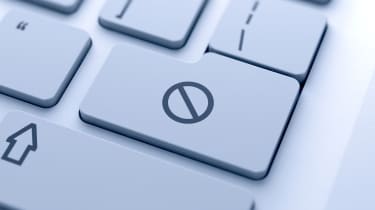 Top security chiefs at Goldman Sachs have condemned the practice of handing the responsibility of access management to humans. Instead, they pushed for more organisations to adopt an automated approach.

To demonstrate this, Barry McConnell, technology risk lead at Goldman Sachs & Co asked his audience at (ISC)2 Security Congress to raise their hands and then put them down when their organisation doesn't follow certain security protocols in regards to privileged access management (PAM).

In a room of roughly 100 security professionals, only five had their hands in the air, indicating they followed the best practices as set out by the Goldman Sachs chief.

"Humans really shouldn't be doing this stuff, if humans have root access, if humans have access to APIs... that's something that should only be done within very controlled parameters," said McConnell.

Poor access management to an organisation's system environment has led to some of the biggest cyber disasters of the century. The Yahoo data breach wasn't just a blow to the affected customers, its access management failures led to the sizable chunk of money (best part of a billion) stripped from its Verizon acquisition.

While there's no strict definition for PAM, there are certain defining characteristics about what it must do, if an organisation implements it.

PAM must have a registration process; knowing what systems have access to which accounts. You need to know what these accounts do and build up as much info about these accounts but don't give humans the responsible for these. "You'll end up having wrong owners after a few years if you assign privileges to humans manually," said McConnell.

In terms of credential storage, eliminating config files is a must. "It's the easiest way for us to breach your organisation," said McConnell.

Organisations should also randomise their root passwords and deploy an external and highly available vault, so attackers can't laterally move after breaching and then find access credentials.

Businesses should also implement ways of monitoring misuse of applications, looking at log files and finding IPs and systems that don't usually speak to each other.

It's important that a business' PAM program accounts for the diverse systems of a modern organisation, from cloud platforms to in-house developed apps, according to Deepak Sharma, information security officer at Goldman Sachs & CO. It must be resilient to network and system failures and also must not affect the current system environment or cause operational slowdown or cessation.

Implementing a PAM program is "highly intrusive", will require C-level backing and the requirement for "over communication", as McConnell puts it, cannot be overstated. Everyone in a given business should know that one is in place and why it's there to protect against the human causes of data breaches.