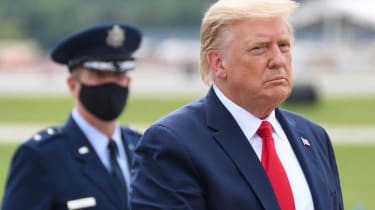 US president Donald Trump has fired his cyber security chief for disputing claims of fraudulent activity in the presidential elections.

Chris Krebs, who headed up the Cybersecurity and Infrastructure Agency (CISA) within Homeland Security, had his job "terminated", according to Twitter posts from the president.

On election day, Krebs addressed security concerns about international interference, particularly from Iranian groups. However, he also called on Americans to be patient and "to treat all sensational and unverified claims with scepticism".

"Regardless of the outcome here, there is a common bond that is stronger than political affiliation and that is that we are all Americans," Krebs said. "Keep calm and vote on, and after today, keep calm and let them count on."

On Tuesday, Krebs tweeted from his government account stating that 59 election security experts all agreed that claims that election systems were manipulated were "unsubstantiated" or "technically incoherent".

The president has yet to concede the election to Joe Biden. Instead, Trump has launched multiple legal challenges, claiming "massive improprieties and fraud".

"The recent statement by Chris Krebs on the security of the 2020 Election was highly inaccurate, in that there were massive improprieties and fraud - including dead people voting, Poll Watchers not allowed into polling locations, "glitches" in the voting machines which changed," Trump tweeted.

"Votes from Trump to Biden, late voting, and many more. Therefore, effective immediately, Chris Krebs has been terminated as Director of the Cybersecurity and Infrastructure Security Agency."

The recent statement by Chris Krebs on the security of the 2020 Election was highly inaccurate, in that there were massive improprieties and fraud - including dead people voting, Poll Watchers not allowed into polling locations, “glitches” in the voting machines which changed...

It is reported that Krebs found out about his firing via the president's Tweets. Just an hour after they were posted, he himself tweeted that he was "honoured to serve" adding "we did it right".