UK among countries most likely to encounter cloud attacks 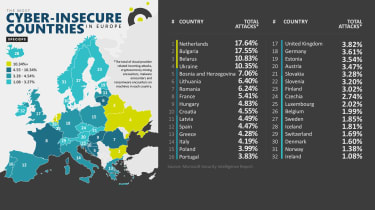 The UK is among the most cloud insecure countries in Europe, according to a new survey conducted by Specops Software.

Nonetheless, it is still among the European countries least likely to encounter ransomware attacks and cryptocurrency mining, at 3.82%, making it the 16th most cyber-secure country in Europe - out of the 32 which took part in the study.

Specops’ survey measured European citizens’ cyber security by analysing the percentage of cloud provider attacks on Azure and the monthly percentage of machines that encountered cryptocurrency mining, malware and ransomware attacks to determine who is the most cyber-insecure.

Despite being one of the countries least likely to encounter ransomware attacks and cryptocurrency mining, it was still named the most cyber insecure country (17.64%) in Europe, alongside Bulgaria, Belarus, and Ukraine. Specops also revealed that one in ten (10.17%) machines in Belarus encounter malware every month.

On the other side of the spectrum, Ireland, which is famously home to one of  Facebook's major HQs, was the least likely to experience cyber-crimes - at 1.08%.

Other cyber-secure countries include Norway, Denmark, Switzerland, and Iceland.

Microsoft has also recently conducted separate research into cyber threats in Ireland, revealing that 70% of large Irish firms have experienced problems with phishing, hacking, cyber-fraud, or other cyber-attacks.

Three in four (76%) of senior leaders in large Irish firms worried about digital threats, while only one in four are confident they can respond to any security incident effectively. This proves that, despite Ireland being supposedly the most cyber-secure country in Europe, senior leaders do not feel confident about their level of security.