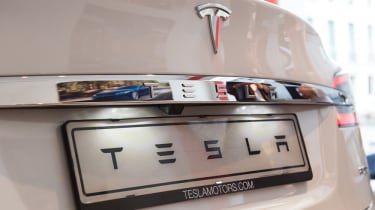 Just a two-inch piece of tape was enough for cybersecurity researchers at McAfee to trick two Tesla vehicles into accelerating fifty miles per hour above the intended speed limit.

As demonstrated in the video below, McAfee’s team convinced Tesla’s 2016 Model X and Model S that a 35 mile per hour speed limit sign falsely indicated 85 miles per hour, simply by adding a thin strip of tape to the sign’s 3.

New scenarios and changes in physical surroundings can cause machine learning systems to act unpredictably. McAfee’s research is just the latest development in a mountain of evidence discouraging the implementation of automated cars onto live city streets.

A recent study conducted by UC Berkeley professor Dawn Song employed a method similar to McAfee’s: stickers were used to manipulate an automated car into thinking that a stop sign actually read ‘45 mph’, jumpstarting the car into motion where it should have remained motionless.

According to MobilEye’s webpage, over 40 million vehicles worldwide are currently equipped with MobileEye technology, though Tesla stopped using its hardware back in 2017.

McAfee’s attempts at hacking newer versions of the Model X and Model S through the tape method were reported to be unsuccessful.

Steve Povolny, leader of McAfee’s Advanced Threat Research team, said in a statement that the study was designed with a preventative purpose.

“Intelligent systems at some point in the future are going to be doing tasks that are now handled by humans,” Povolny said. “If we are not very prescient about what the attacks are and very careful about how the systems are designed, you then have a rolling fleet of interconnected computers which are one of the most impactful and enticing attack surfaces out there.