A pricey option that slows your computer down more than the competition, while keeping you no safer 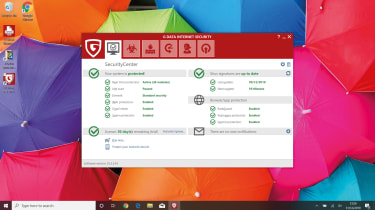 G Data’s dark red trim gives it the air of an emergency service, and the interface provides a sober, functional overview of your protection. The first two pages in particular are a hit: it only takes two clicks to check your system status, carry out various types of scan or create a bootable rescue disk.

The third page is for G Data’s proprietary, fully customisable firewall. Would-be sysadmins will appreciate the freedom this gives you to create your own security rules, but it’s fiddly to work with because the necessary controls are spread across three tabs in the main interface and then four more panes in the Settings window.

Next up is what’s advertised as a “cloud backup” feature – but you have to provide the storage yourself, in the form of either a Dropbox or Google Drive account. Doing so might protect your files from ransomware, but there are plenty of free backup tools that can do the same job, and most will go a lot further, with support for multiple backup sets and local destinations.

We’re not blown away by G Data’s parental controls, either. These offer simple web filtering and time limits for local Windows users, but if you want to extend protection to an Android device you’ll need to shell out £12.95 for a separate app. Lastly, perhaps the least useful bit of G Data Internet Security is the Autostart Manager. This shows you all the processes set to run at startup, but gives no hint as to whether they’re trustworthy or not. Wasn’t this supposed to be a security suite?

G Data doesn’t even inspire at the crucial task of stopping malware. It combines a home-grown scanner with one licensed from the much better-appointed Bitdefender suite, which you’d think would give you the best of both worlds – but Bitdefender’s effectiveness clearly isn’t down to its engine alone, as G Data’s two-pronged approach earned it only a 99.6% protection rating, which is no better than the free options.

AV-Test also rated G Data Internet Security one of the slowest security suites around, noting a performance drop-off of around 12% when visiting popular websites and launching applications, along with a steep 29% hit when installing new software. We could live with that if we had to, but there’s no reason to pay more than £40 a year for it – not when our top-rated packages offer broader, slicker protection at lower prices.