Strong protection, but performance is distinctly on the slow side – and we’re not crazy about the price 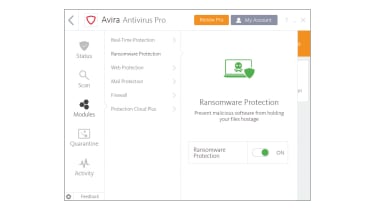 We’re not saying Avira is pushy, but after installing Antivirus Pro you’re given a dashboard that invites you to install no less than eight other products. To be fair, they’re all free to download, but the Software Updater, Password Manager and VPN are feature-limited, and cost extra to fully enable.

The antivirus module itself is disappointingly bare. You can browse pages dedicated to Ransomware Protection, Web Protection and Mail Protection, but each one offers only a single on/off switch, and you have to open the Settings window to discover and adjust what gets scanned by each module. It’s a similar story with the Firewall: the main interface lets you turn it on and off, but only on peering into the Settings do you discover that Avira is merely acting as a middle-man for Windows’ built-in firewall.

The Home Guard scanner didn’t wholly endear itself to us, either. Like Avast’s network scanner, this scans all the devices on your home network for vulnerabilities, and it did usefully flag up some open ports and network shares. But the report is presented in a bafflingly undersized window, so reviewing it involves a lot of scrolling.

Still, when it comes to the crucial task of defeating viruses, Avira obviously knows what it’s doing. With an overall 99.9% protection rating, Avira Antivirus Pro came very near to the top of the performance chart, matching Labs Winner Bitdefender and losing out only to Norton and Trend Micro. The software also wrongly flagged up only a single false positive across all of AV-Comparatives and AV-Test’s exercises: here, only Kaspersky Internet Security 2020 did better.

System performance isn’t so strong, however, with Avira’s overall rating of 90.7% placing it in the lower half of the rankings. That would be easy to overlook if the package were cheap and cheerful, but in fact it’s one of the most expensive security products we’ve seen, costing £39 for the Antivirus Pro package or a wince-worthy £86 for the Prime package, which includes unlimited VPN usage and full versions of Avira’s Software Updater, Password Manager and System Speedup tools.

In the end that’s what does for Avira Antivirus Pro. It’s undeniably effective, but the expense is impossible to justify when the likes of Bitdefender and Norton deliver similar performance – and more features – for much lower prices.